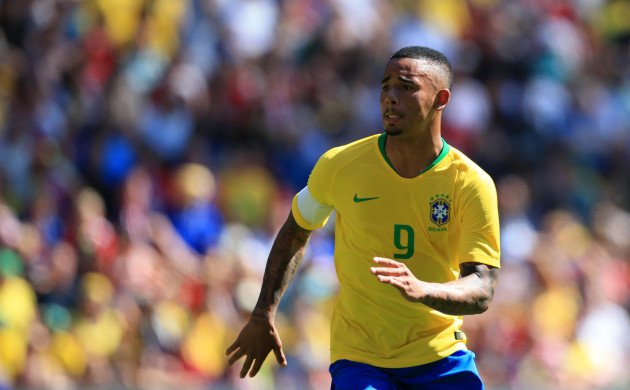 Brazil enter the 2018 World Cup with a forward line they could have done with four years ago. Back then, Neymar carried the fight on the front end with four goals before injury but Fred, a 30-year-old plying his trade in Brazil, led the line and a Zenit-based Hulk rounded off a forward three.

Back-ups Jô and Bernard arrived at different junctures in their careers and were representing Atlético Mineiro and Shakhtar Donetsk respectively. What this all meant was that Brazil’s forward line was hardly drawn from the top tier of club football. With David Luiz and Thiago Silva the only scorers for Brazil in the knockout stage before Oscar’s 90th-minute consolation against Germany, the whole mixing pot for the Brazilian attack was decidedly underwhelming.

This time is different. Neymar has ample support. Gabriel Jesus may be part of the rotation at Manchester City but he’s the main prong of Brazil’s attack. Willian and Philippe Coutinho look likely to feature heavily, while Roberto Firmino is the bench option - top-class players, all drawn from top-tier European clubs.

There’s always the worry that manager Tite might pack the midfield and run a solid but dour formation - he started Casemiro, Fernandinho and Paulinho against Croatia, which felt like overkill - but there’s enough attacking quality in and around the squad for the neutral to hope that Brazil could throw off the shackles and entertain, at least in the group phase.

Neymar remains the main man, and will harbour genuine ambition of emerging from the tournament with his claim towards a loose title of world’s greatest player enhanced. However, with his last match before Brazil’s pair of friendlies this last week occurring in late February, it could be challenging for him to complete back-to-back games in the early stages of this tournament.

His goal record for Brazil is outstanding, but he isn’t the sole goal provider any more, and his rate skews slightly historically. Before 2016 he had 46 goals in 69 internationals, but in the time that Jesus has featured in the national side, his rate has somewhat slowed, and he and Jesus have scored goals since then at a similar rate. Neymar has nine in 16 matches since the start of 2016, while Jesus has 10 in 17.

Those interested in the tournament top scorer market may find it interesting to note that despite winning five titles and going deep in many World Cups, Brazil have only had a player collect or share the Golden Boot on four occasions. Within that run, Ronaldo’s eight goals in 2002 is the only punctuation of a drought going back to 1962.

Notwithstanding 2014, Brazil rarely arrive at World Cup without a wealth of attacking choices and this tournament is no exception. As such, the goals often get shared around. Ronaldo was backed up by Ronaldinho and Rivaldo, Romario and Bebeto shared the workload back in 1994, while an array of stars got on the scoresheet for their 1980’s sides: Eder, Zico, Socrates, Careca and Falcao to name just a few.

So it’s realistic to look at Brazil’s attack as a unit, with Jesus at the head. That’s not to say that Neymar won't dazzle, but in his entire career he has been as much a creator as a finisher. In fitting in with Luis Suarez and Lionel Messi at Barcelona, it was Suarez who filled the central attacking role - and scored a ton of goals too. In fitting into the Paris Saint Germain team, Neymar has got his share of goals and assists, but Edinson Cavani didn’t lose out on the goal front. Play with Neymar and he will provide you with good chances.

For all those reasons, a bet on Jesus to finish as Brazil’s top goalscorer looks solid value. He is available at around 3/1 compared to Neymar’s 5/4, and while Neymar may well be on penalty duty, that difference still appears too great. Those convinced of Jesus’ case here may want to top up with a top tournament goalscorer play; he’s available at around 16/1 for that market.

Brazil will surely go fairly deep into this tournament, and will be good for goals. Jesus might be the one to lead the way.