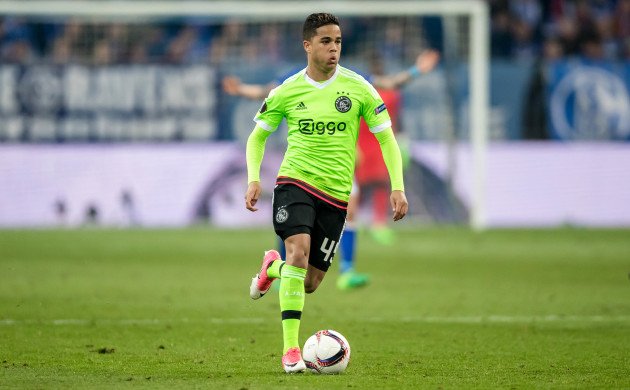 Tactical analysis: Why Justin Kluivert is wanted by many of Europe's biggest clubs

It’s been less than a year since he made his senior debut for Ajax, but Europe’s biggest and best clubs already have their eyes on Justin Kluivert.

Notable at first as the son of Ajax and Holland legend Patrick, Kluivert junior quickly set about forging a footballing identity of his own at the Amsterdam Arena. Where his father was a centre-forward who came alive inside the penalty area, the current Ajax star is a tricky, fast and dynamic winger, able to play on either flank.

Although he wasn’t in the line-up for Ajax’s Europa League final defeat by Manchester United in May, Kluivert was pictured speaking to Jose Mourinho after the game in what looked very much like the Red Devils boss throwing his hat into the ring early for the eventual transfer scuffle that is almost certain to come when the teenager is prised from the Eredivisie.

Still striving for the consistency that evades most teenage footballers, Kluivert’s vast talent has thus far been demonstrated in fits and starts with Ajax, and he is yet to establish himself as an automatic pick for the first XI at the Amsterdam Arena.

The brightest flash of his brilliance came thanks to a stunning hat-trick against Roda in the Eredivisie, his first goals of the season, each strike as brilliant as the last. With all three goals showcasing various aspects of his burgeoning skill-set – a rasping strike from distance, a nonchalant dribble and a tidy, cultured finish – you’ll be hard pressed to find a better treble anywhere in Europe this season.

As he continues to build a base of experience, maturing as both a player and a young man, Kluivert will at times frustrate. There will be instances in which he’ll over-elaborate when a simple pass would have been more effective, or make missteps with his off-ball movement of defensive duties.

But beyond the eye-catching moments of brilliance, the stuff that gets fans out of their seats and has largely shined a spotlight on the precociously talented winger, there have been subtler signs of the kind of nuanced skills that will truly set Kluivert apart from his peers.

Yes, he is tremendously quick and possesses dazzling dribbling skills, but he has also shown a willingness to press and track back, and an understanding of how to properly do both within a given system. He can rattle the ball into the corner of the goal from range, but he also has acute vision that allows him to execute chance-conjuring passes that most players his age wouldn’t even spot.

The above image, taken from Holland Under-21s’ 8-0 win over Andorra in November this year, shows Kluivert diligently tracking back from his position on the right wing as the away side attempt to build a rare attack.

Kluivert followed the man in possession to the end of the Netherlands penalty area before nicking the ball and playing a safe pass back to the Dutch goalkeeper.

In a fixture such as this one, when Holland were well on their way to a comfortable victory, it would have been easy for Kluivert to switch off from his defensive tasks. But the fact that he remained committed to doing his job on both sides of the ball speaks to his professionalism and mentality.

This time we see Kluivert in Eredivisie action with Ajax. The teenager brings down a long cross-field pass with an exquisite, outside-of-the-boot touch, perfectly playing the ball into space for himself in the inside-left position.

What is most impressive about this move, however, is the way the 5ft 7in winger shrugs off the recovering challenge of the defender, knocking the bigger man to the ground thanks to his surprising upper-body strength.

Kluivert then has the presence of mind to get his head up and assess his passing options. Spotting a team-mate arriving into space on the edge of the box, he slides a nicely weighted pass into his path.

He may not look it at first glance, but this show of strength and aggression suggests Kluivert is well equipped for the rigorous demands of the game at senior level, and could yet thrive in a more physical league than the Dutch top flight.

Here, in a Europa League tie against Schalke last season, we see Kluivert breaking forward in typical fashion: direct and at speed having been fed by the Ajax midfield.

The then-17-year-old spots the run of Davy Klaassen into space inside the penalty area and demonstrates his superb technique and astounding vision by weaving the ball through four Schalke players to pick out the now-Everton midfielder.

Kluivert is still some way from being the finished article, with plenty of polishing to go before this rough diamond is ready to shine on the biggest stage. But there is no doubting his talent and immense potential. For now, there is no better place for him to develop than at Ajax.

It will only be a matter of time before Europe’s biggest and best come knocking for him, though. Kluivert’s ability to play on either wing, adaptability and propensity for learning quickly on the job would make him an asset for any manager and a good fit for most tactical systems.

Although he is yet to fully establish himself in the first-choice XI in Amsterdam this season, he has already eclipsed his Eredivise goals return from last term, while also upping his dribble success and pass accuracy. If he continues to improve at his current rate, it won’t be long before he's the most successful footballer in his family.