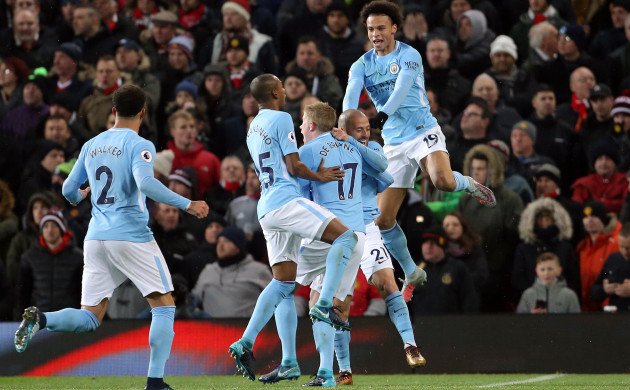 Manchester City are irresistible, but are they storing up trouble for later?

After Manchester City followed up their defeat of Manchester United by dismantling Tottenham at the weekend, any semblance of a title race looks to have vanished. Indeed, had Kyle Walker not received two bookings in three minutes just before half-time against Everton back in August, it’s easy to imagine they would have a 100% record.

The Premier League isn’t supposed to be this easy, and City’s run is more impressive when we factor in that Walker is the only summer outfield signing to have played significant minutes. It might not be a wholly new team, but it’s certainly become one built in its manager’s image. City haven’t got to their current position just through attacking panache, though. Defensive resilience has also been key, with the addition of goalkeeper Ederson looking ever shrewder by the week.

Remarkably, the team which destroyed Tottenham had something of a patched-up defence. Only months ago, Fabian Delph was nobody’s idea of a left-back, yet he has proven competent. Eliaquim Mangala looked likely to be on his way out back in the summer, yet he stayed and has now come into the rotation picture with Vincent Kompany’s fitness unreliable and John Stones out.

Prior to this season, meanwhile, Nicolas Otamendi’s City form meant no-one envisaged him as a potential title-winning centre-back; this time last year, the Argentine was being repeatedly exposed by City’s system and midfield vulnerability. (This clearly shows the folly of evaluating defenders without understanding how they fit into the system they are playing - Otamendi has over 50 caps for Argentina, which is not a definitive measure of quality but certainly an extremely strong hint.)

The praise for this City team has frequently oscillated around its forward line, but on Friday Pep Guardiola brought attention to Fernandinho. Guardiola, an extremely talented and decorated midfielder back in the 1990s, stated that he himself would not be good enough for this team because the Brazilian was “much, much better”.

It wasn’t the first time Guardiola praised Fernandinho. In November he called him one of the “best three holding midfielders in the world”. Indeed, the difference in reliability in City’s midfield between this year and last is stark and Fernandinho has been a core part of that.

Formations varied far more in Pep’s first season, and in a 2-1 victory over Arsenal this very weekend a year ago, Fernando played behind David Silva and Yaya Touré, while Kevin De Bruyne started wide left. The defence featured three players who have now left the club. Consistency in selection has certainly helped City this year, and the spine of any team can be particularly vulnerable to changes. It’s something Tottenham have suffered with since Victor Wanyama vanished in late August, and most of City’s matches have started at least nominally with the same midfield three.

It may not pay to adhere too strongly to formation definitions with regard Guardiola’s selections, and Silva’s emergence in a more attacking role in the derby reflects that. However, De Bruyne has started every league match this season in a central midfield role, Fernandinho has mopped up beside him in 17 of those games and Silva, before missing the Tottenham game, had started in 16 out of 17. This balance of two of the best attacking midfielders in the league flanking one of the most underrated midfielders in the league has certainly worked, but is it possible that City are storing up trouble for later in the season?

The Premier League may be all but over, but wider dreams of Champions League glory could require the club's players to overcome a heavy workload, with plenty of minutes already in their legs. There is a question here surrounding continued resilience, and in comparison to their rivals City have been heavily worked, particularly with regard the three midfielders mentioned. If we rank the top five outfielders by Premier League minutes played for each of the top six clubs - for City this includes all of Silva, Fernandinho and De Bruyne - we see significant differences.

The average age of the top five most-heavily used outfielders from the big six Premier League clubs in 2017/18 is as follows:

That’s some serious usage going into old legs, and if we drill deeper, other teams look to have protected their older players better. Otamendi (29) and Fernandinho (32) each have five Champions League starts to add to their league minutes, while Silva (soon to turn 32) has three. In contrast, Jose Mourinho looks to have protected Ashley Young (32) and Antonio Valencia (32) a little. Each has only two Champions League starts to add to league minutes.

Arsenal, too, have spared Nacho Monreal (31, one European start) and Laurent Koscielny (32, zero European starts) from overuse exterior to league play. None of Chelsea or Liverpool’s most used players are over the age of 28, while only Jan Vertonghen (30) has carried the duel weight of heavy usage and age for Tottenham, and the injury to Toby Alderweireld has made his continued use a necessity.

City have put together one of the great half-seasons in English football history, but many teams have looked brilliant at this time of year only to falter later, with the Barcelona side of 2015/16 a notable example. Winning your league early certainly helps your Champions League chances, and City couldn’t have done more at this stage to achieve that goal. Squad rotation will need to kick in somewhere, though, and in the first half of the campaign they have generally avoided key injuries. To take the next step up Guardiola's team will need to be resilient, maintain their quality and pick up their fair share of luck, too.