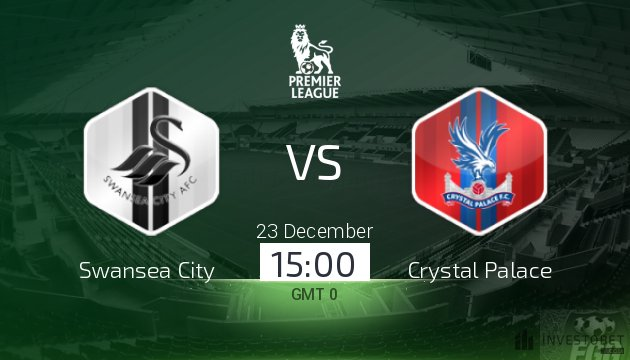 Swansea City begin the post-Paul Clement era with a crunch clash at home to a resurgent Crystal Palace side.

Clement was handed his P45 earlier this week, with the Welsh outfit’s poor start to the season resulting in his exit after around 12 months in charge. The former Derby County manager, who has also held coaching jobs at Real Madrid, Paris Saint-Germain, Blackburn Rovers and Chelsea in the last decade, did an excellent job of guiding Swansea out of trouble last term, but they again find themselves threatened by relegation midway through the campaign. In fairness to the 45-year-old, he was not dealt the best of hands by the club’s hierarchy in the summer, with Gylfi Sigurdsson and Fernando Llorente both sold and adequate replacements not forthcoming. Clement had succeeded in solidifying the Swans’ defence, but they have been extremely meek in attack so far in 2017/18.

Palace were themselves in a precarious position earlier this season, so perhaps Swansea can find solace in the way their upcoming opponents have pulled themselves out of the bottom three under new management. Roy Hodgson’s side are currently on a seven-game unbeaten run – their longest stretch without defeat in the Premier League – and although Palace are still only two points clear of the drop zone, things are looking significantly brighter at Selhurst Park right now. A man of Hodgson’s experience will know there is still a long way to go, however, and the fact the Eagles meet Arsenal and Manchester City next week makes this game even more important.

Britton is still registered as a player but will not feature this weekend, not least because he is currently carrying a calf strain. Wilfried Bony (hamstring) and Kyle Bartley (knee) will also miss out for the hosts in this must-win encounter, while Ki Sung-yeung (calf), Wayne Routledge (muscle) and Leroy Fer (back) all require late fitness tests. It will be interesting to see whether Britton enacts any significant changes to either the personnel, formation or style of the team, with Renato Sanches one individual who could return to the fold after being left out in recent weeks. Chelsea loanee Tammy Abraham will be key as the lone striker up front, with Jordan Ayew and Nathan Dyer likely to be the players tasked with providing support to the striker.

Christian Benteke scored his first goal of the season against Leicester last time out, but the burly Belgian frontman will not take part in this game due to suspension. Fellow striker Connor Wickham (knee) will not make a return until the New Year, while Tim Fosu-Mensah (hamstring), Mamadou Sakho (calf), Damien Delaney (unspecified) and Joel Ward (groin) are four defensive absentees Hodgson has to contend with. The former England head coach will stick with his preferred 4-4-2 formation in this encounter, with Andros Townsend set to partner Wilfried Zaha up top and Serbian midfielder Luka Milivojevic in line to return to the engine room after completing a one-match ban.

Taking everything into account, it is probably worth putting some money on this being a low-scoring game. Swansea have struggled for goals all season long, and although Palace have improved in that regard in recent weeks, Hodgson’s principal objective will be keeping things tight at the back. Fewer than 2.5 goals to be scored in total therefore looks like a sensible selection, while a 0-0 or 1-1 draw are perhaps the two most likely outcomes in terms of a correct result.