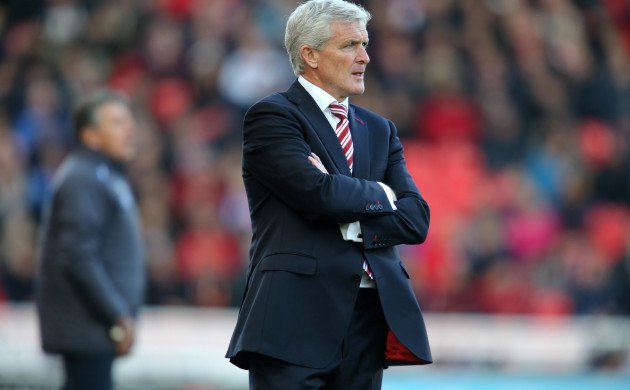 Stoke City are not having a good season. They won one Premier League game in August, one in September, one in October, none in November and last week got off to a quick start in December by beating Swansea. Sadly, this week’s trip to Tottenham reset any hope of a fast change in trajectory as they were trounced 5-1.

This generally abject form has left them just three points clear of the relegation slots in 15th with 16 points from 16 games. A point-per-game rate is usually enough to create concern about a team’s long-term future; it will need to be improved upon quickly if the Potters are to extricate themselves from the lower echelons of the league.

This kind of problem is new for Stoke, at least under Mark Hughes. He is in his fifth full season at the club and before 2016/17 had been remarkably consistent, landing the team in ninth three seasons in a row before a dip; last term they finished 13th and their 44 points was a distinct drop from the 50, 54 and 51 points gained previously.

Depending on perspective, the difference between ninth and 13th may not seem of crucial importance. As long as Stoke deposit themselves safely in mid-table it won’t fundamentally alter the structure or income of the club. If we look at Hughes’ seasons after 16 games, we see that this year is the weakest. The range for the previous four seasons is 18 to 23 points. In the big picture, their current 16 points might not seem too far away -after all, one extra win would put them where they previously have been at this point - but how they’ve arrived at this point throws up a genuine concern: they are leaking a lot of goals.

In conceding 35 goals, Stoke have the worst defensive record in the division. After a promising first three games in which they conceded just twice, it’s been a particularly grim run. On six occasions they have conceded twice, as well as further games allowing three, four, five and seven. This means their goal difference works out as -1 per game, which is far worse than any other season in Hughes’ tenure. Last season’s final goal difference of -15 (-0.4 per game) was the previous worst and that’s a huge difference. Even if, in a pique of kindness, you choose to discount the heavy defeats by Manchester City and Tottenham, the rate is still worse than any of his full seasons.

Where Hughes previously appeared to offer consistency, there now looks to be a creeping decline. What might be causing this?

One major difference between this season and previous years is Hughes’ decision to shift from a back four to a three centre-back formation. The only game in which Stoke started with a back four this year was the 7-2 loss to Manchester City, but perhaps that failure disguised a system that might get better results, and did so before. This leaves Hughes with a difficult choice moving forward: either he persists and trusts that over time, his team will adapt to their new system, or he reverts to what worked better before and hopes that any adaptation time is swift.

Personnel-wise, there has been disruption in both the centre-back and central midfield positions. Kurt Zouma and Kevin Wimmer both arrived in the summer to shore up the back line, while Joe Allen finally has a consistent partner alongside him in Darren Fletcher. Since the failed transfer of Gianelli Imbula, the centre of Stoke’s midfield has been a difficult position for them to fill; yet while Fletcher was deemed to be a steadying influence, at 33 years old it’s hard to suggest he is a long-term solution.

On paper, Stoke’s squad looks easily good enough to survive a relegation threat, but at the same time it is unnecessarily bloated with older players likely to be on large contracts (Glen Johnson and Charlie Adam are still on the books and have barely figured this season), while players that fit a preferred age profile like Jesé and Zouma have arrived on loan. Stoke regularly take these high-upside gambles (Bojan, Xherdan Shaqiri, Ibrahim Afellay) and Jesé fits that profile too, but have they rarely worked out. It’s a mixed transfer policy that feels more opportunistic than strategic.

But does it matter? Premier League comfort should not be taken for granted. Swansea’s fairly rapid transition from apparent mid-table security to season-on-season relegation battles is the most clear evidence of that and a couple of errant transfer windows can be hard to recover from.

Stoke’s future schedule offers hope and a chance to control their destiny. Before the end of the Christmas period they host West Ham, West Brom and Newcastle, and their three subsequent visitors are Huddersfield, Watford and Brighton. Stoke haven’t played well this year, and right now Hughes is probably as vulnerable as he has been at any time in his Stoke career. The next few weeks could well be decisive for him and if results stay lean, what chance another Tony Pulis return?