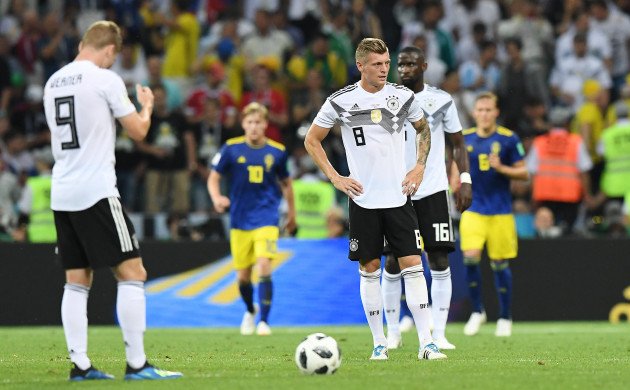 It seems that every four years we have to relearn the lesson of just how hard it is to retain the World Cup. A number of recent champions have fallen early – France in 2002, Italy in 2010, Spain in 2014. And now comes Germany. Their first-round exit from Russia 2018 is as fascinating as it was unexpected – and quite apart from any problems in the German camp, it sheds light on and falls between two contradictory developments in international football.

One is the recent domination of Western Europe – the region that has supplied five of the last six finalists. And even at this early stage, it is very likely that Europe will have at least one finalist in the current competition. One half of the draw contains seven European teams in the eight. It will be up to either Senegal, Japan or Colombia – defending on the results in the last round of Group H – to win three consecutive matches against European opposition in order to reach the final.

The other half of the draw has just three sides from Europe – but Brazil against Mexico is the only tie with no representation from the continent. Western Europe, with a touch of Scandinavia and the East, have been strong in this competition, even with the early exit of the Germans. The rest of the world can only muster six of the last sixteen.

But there is also another dynamic pushing in the other direction. In club football, gaps between teams are growing. An elite few dominate the Champions League – teams which tend to win their domestic league at a canter. Meanwhile, at international level, the gaps are shrinking. Matches which a few years ago were relatively easy to predict have now become so tight that any outcome is possible.

After 90 minutes of the match between Germany and South Korea, the defending champions were still in the competition. They needed a goal to stay alive, and with six minutes of stoppage time to get it, many would have expected them to save themselves at the last. Instead, they lost 2-0 and finished bottom of the group. The margins are so tight that little details can make all the difference – and the holders, without quite the same hunger to win as in the previous tournament, are vulnerable in such an unpredictable scenario.

The expectation is that in the knockout stage the traditional big teams will come to the fore. But most of them have sweated their way through so far. And given the level of unpredictability, plus the chance of ‘winning’ 0-0 by forcing a penalty shoot-out, it would be unwise indeed to take anything for granted.

This apparent contradiction – European predominance in a more unpredictable environment – can surely be explained, partially at least, by the globalisation of the game. Because it is a globalisation that has taken place on the terms of European club football.

Western Europe congregates the best players from all over the planet, along with the best coaches, and therefore, the leading ideas. The strongest European national teams have a core of players who are in action with each other week in week out in the colours of one of the handful of globally dominant clubs. This clearly gives them an advantage.

But the fact that the global market sucks in players from all the other continents has a democratic effect on national team football, while it weakens the club game elsewhere in the world. Players from less traditional nations are exposed to top-level football. They learn and develop – and learn to have more faith in their own ability, to lose any inferiority complex when they come up against the big names. And even those players and coaches who have not been part of the European experience are following the Champions League on television, and have concrete notions of current trends in the game.

And it could be the case that the current World Cup brings to an end, for a while at least, the model of patient possession football that has been the bedrock of the last two world champions, Germany in 2014 and Spain four years earlier. Defences have learned to counter it, to slow down the slick passing movements and render them sterile. Germany never found their rhythm, while Spain, for all the promising passages of play, have not been entirely convincing.

Is the pendulum swinging back towards a more direct style, with dribbling at pace? If so, then Brazil might be a good bet to bring a halt to the Western European domination.