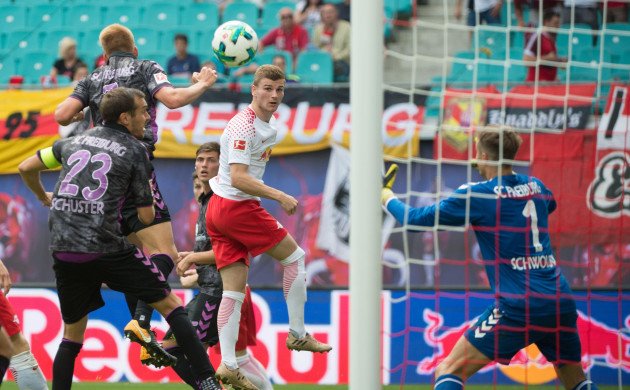 Ralph Hasenhuttl would have been a worried man at half-time of Saturday's clash with Freiburg. An opening-day defeat by Schalke hadn’t exactly been the perfect start to the season for his RB Leipzig side, who now found themselves 1-0 down to Freiburg at the interval.

Yet the brooding, German coach soon had his spirits raised. Just three minutes after the restart his star striker, Timo Werner, latched onto a corner kick to lash a header past the goalkeeper at the front post.

Willi Orban later grabbed a second for Leipzig, before Werner once again found the net to put the game beyond doubt. Although new signing Bruma scored an outstanding volley late on, this was a game which Werner had almost single-handedly turned around.

Of course, this is nothing new for RB Leipzig fans. The German striker was one of the club’s top performers last season, with 21 goals in 31 Bundesliga games. Although there are a number of top players at the club - Naby Keita, Emil Forsberg, Yussuf Poulsen - Werner is perhaps the most vital to Hasenhuttle's side.

Not only does he score goals on a regular basis, but he scores important ones too. Last season his strikes ensured wins over Schalke, Hoffenheim, Gladbach and Mainz, as well as important draws on the road. And with seven assists in those 31 appearances, Werner has shown he’s no slouch when it comes to creating for his team-mates either.

Although the striker may not be considered an equal to the Bundesliga’s other title-challenging goalscorers, Pierre-Emerick Aubameyang and Robert Lewandowski, he has thrived under the pressure of trying to catch them. Both the aforementioned superstars cultivated their reputations through solid performances in European competition, which is exactly what Werner will try to do this term.

In Group G of the Champions League, Leipzig and Werner will relish going toe-to-toe with Besiktas, Porto and Monaco, as they seek to showcase their fast-paced, high-pressure style of football to a wider audience. It's a group that the German side can realistically qualify from, and they'll probably score a lot of goals in it too.

And what of the domestic campaign back home? Leipzig may have already dropped points in the league, but there’s no reason why they can’t go one better than last season and truly challenge Bayern Munich and Borussia Dortmund for the title. Carlo Ancelotti’s side are in the midst of a malaise, while Peter Bosz has just waved farewell to star forward Ousmane Dembele at Signal Iduna Park.

Indeed, perhaps the time has come for Werner to take his next decisive step forward. The 21-year-old has already been inducted into Joachim Low’s Germany squad, and he'll have designs on nailing down the No.9 shirt for the national team ahead of next summer's World Cup. Another stellar season in the Bundesliga - and perhaps even a title tilt to boot - will do his prospects no harm whatsoever.

This exciting young striker is only just getting started. Now it's time to wait and see just how good a season he’s set to have.