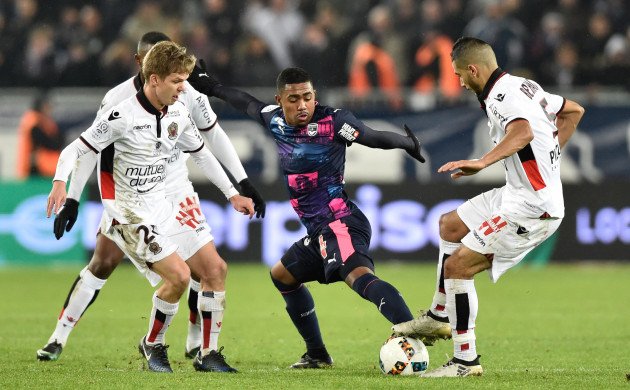 Tactical analysis: What would Bordeaux forward Malcom bring to Arsenal?

For months now, speculation has been rife over the future of Bordeaux winger Malcom. The 20-year-old Brazilian has been linked with big-money moves to Manchester United, Tottenham Hotspur and Liverpool, but, in light of Alexis Sanchez’s imminent departure, Arsenal have emerged as favourites to snare the Ligue 1 standout.

It’s easy to see why interest is high. Ever since the Brazilian arrived in France from Corinthians as a teenager two years ago, he has steadily improved, rounding out his skillset and taking on greater responsibility with Les Girondins.

This season, the youngster is enjoying a breakout campaign. Despite Bordeaux’s struggles, Malcom has shone, scoring seven Ligue 1 goals – several of which utterly spectacular – and registering five assists. These numbers may not seem spectacular, but a deeper inspection of his performance statistics evidences just what a potentially elite talent the Brazil Under-23 international is.

In the French top flight this term, his average of 2.7 key passes per 90 minutes is the best of any player aged 25 or younger with more than 300 minutes under their belt, while his 3.7 successful dribbles per 90 is comparable to Ligue 1’s highest-ranking players – with the exception of Neymar, who is completing a staggering 7.7 take-ons per 90 for Paris Saint-Germain.

What’s more, Malcom has displayed an impressive degree of maturity this season, comfortable in his role as Bordeaux’s attacking linchpin. His seven goals and five assists means he has been directly involved in 52.2 per cent of Bordeaux’s total league goals for the campaign so far, a higher share than any under-23 player in Europe, as well as the likes of Harry Kane at Tottenham (45.7 per cent), Neymar at PSG (34.5 per cent) and Barcelona superstar Lionel Messi (47.9 per cent).

Considering Jocelyn Gourvennec’s side have struggled in 2017/18, Malcom’s ability to consistently produce high-quality performances and end product is hugely commendable.

If Arsenal fans are hoping that Malcom will be signed to directly replace the apparently Manchester United-bound Alexis Sanchez, however, they might be surprised by just how different the Brazilian is. For a start, he tends to play on the opposite flank to the Chilean, operating on the right side of attack and looking to cut inside onto his stronger left foot, while the reverse is true of the want-away Gunners No.7.

While Malcom may lack Sanchez’s physicality and ability to break ahead of the ball in search of scoring opportunities, he is equally as dangerous as the former Barcelona man - just in very different ways. And, as Sanchez tends to do his best work in the half-space or when drifting towards the No.10 zone, Malcom arguably offers a more rounded threat than the Chilean.

When dribbling Malcom is dynamic, technical and unpredictable, able to aid his side’s progression up the pitch through sheer force of will. In the above image, taken from a recent game against Troyes, we see Malcom receive the ball deep inside his own half as Bordeaux look to transition from defence to attack.

Leaving his marker in his wake, the 20-year-old bursts forward into the Troyes half, catching the home side on the hop, not allowing them time to settle back into their defensive structure.

As he approaches the penalty area, Malcom cuts in and demonstrates his technique, vision and composure by identifying the run of striker Gaetan Laborde and floating a perfectly weighted cross into the 23-year-old Frenchman’s path to score.

And it’s not as though Malcom is a one-trick pony: although he prefers to move inside when attacking, he is also able to attack his opposing full-back on the outside and whip dangerous crosses into the box with his right foot, in the manner of a more conventional winger.

We see this in evidence above. Lorient have doubled up on the Brazilian and are showing him down the right channel, on to his weaker foot.

But Malcom gladly accepts their invitation to attack towards the byline, outfoxing his adversaries with speed and skill, before producing an exquisite delivery into the penalty area from which Bordeaux score.

The main quandary defenders face when dealing with Malcom is whether to get tight and deny the youngster space, or stand off slightly to monitor the zone he is looking to attack, limiting his passing option.

Here, in a game against Dijon in December, Malcom collects the ball wide on the right and spins inside into space.

As the Dijon defenders retreat, Malcom unleashes an unstoppable 30-yard rocket into the top corner. The home side’s defenders might consider themselves unlucky in this instance, as for every shot attempted from that kind of range, only a small percentage result in a goal. But Malcom has previous when it comes to scoring jaw-dropping goals from distance, making this kind of defensive approach risky.

So, you get tight then? Not necessarily. Malcom is happy to invite pressure in order to create space for team-mates; it means he has to think and act a little quicker on the ball, but it opens up opportunities for chance-conjuring through-balls.

That’s exactly what we see above. Again, Malcom is cutting inside form the right, but this time the Lyon backline look to shut him down as he enters the danger zone.

Two defenders come to meet the Brazilian on the edge of the box, but Malcom produces a reverse pass to pick out the overlapping run of right-back Youssouf Sabaly, leading to a situation from which Bordeaux pose a real scoring threat.

With a trajectory pointing towards the game’s upper echelon, Malcom’s valuation of around £40m could soon come to represent an extraordinary bargain. If Arsene Wenger is looking to rebuild his attack without the presence of Sanchez, and with Mesut Ozil’s future also up in the air, Malcom would be a fine choice of focal point.