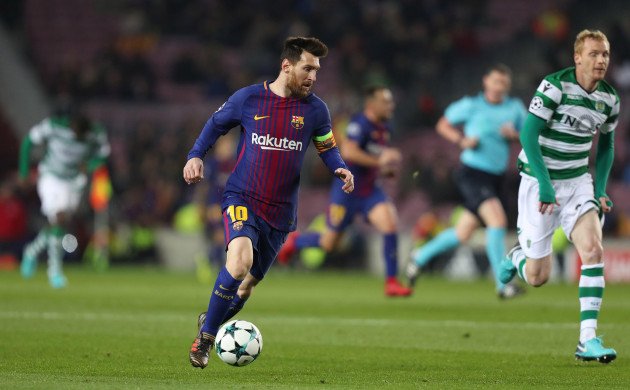 When Athletic Club saw Ernesto Valverde head through the exit door in the summer, there was an immediate desire to appoint a replacement who would prove a safe pair of hands at San Mames. Somebody who would not rock the boat, but instead steady things and guard against a sharp downturn after a period of unprecedented success. Interestingly enough, that is the same job description Valverde was handed upon his arrival at Barcelona.

After guiding his former club to four consecutive Europa League qualifications despite the obvious restrictions of a Basque-only transfer policy, Valverde was earmarked as an intuitive and intelligent coach who is capable of striking up a good balance. Whether pre-match or in-game, he has an eye for negating opposition strengths and protecting his side’s own weaknesses, offering a more rounded approach than Luis Enrique. Despite the gulf in quality between Athletic and his new Barça squad - as well as their obviously contrasting expectations in La Liga - his task has not changed a great deal during his first few months in Catalonia.

The sale of Neymar to Paris Saint-Germain threw an unexpected spanner in the works back in August, but Valverde’s role was that of an immediate and efficient firefighter. Ousmane Dembele was purchased as a winger with a similar profile to the departing Brazilian, but a long-term injury to the young Frenchman forced an immediate rethink at Camp Nou. With the tools left at Valverde’s disposal, the usual 4-3-3 system no longer looked viable.

Further balance was sought in a 4-4-2 that promised license for Andres Iniesta to come infield from the left, with Jordi Alba asked to provide the cutting edge in the final third on the overlap. Ivan Rakitic, too, would often find himself occupying a vague area on the right flank of the midfield to allow the likes of Sergi Roberto and Nelson Semedo to provide width on the opposite flank.

Lionel Messi could roam free, with Paulinho offering a more physical, direct presence when pushing up ahead of Sergio Busquets in central midfield. The balance has worked, with solid foundations taking precedence over an aesthetically pleasing style, but Messi’s freedom is both a blessing and a curse. While it is a terrific luxury to have in terms of creating chances and breaking teams down, it also makes Barca incredibly one-dimensional.

This may not be that big a problem in La Liga, but their dependency on one individual - best player in the world or not - seems risky, particularly ahead of a Champions League clash with Chelsea. Against Villarreal on Sunday evening, everything was expected to come through Messi’s combination play with Jordi Alba, and eventually that bore fruit. Such a connection is not a cure-all, however, and before Villarreal saw Dani Raba dismissed, Javi Calleja’s men looked capable of keeping the Blaugrana at arm’s length.

Much of Barcelona’s system this season revolves around freeing Messi. This makes Valverde's side rather bland, with the vast majority of players utilised as cogs in a machine that has just one operator. Should Messi fall victim to illness or injury, or perhaps simply not have his sharpest day at the control panel, it makes this Barca team appear painfully short-term and much of its personnel expendable. Their plan A is often synonymous with genius, given who lies at its crux, but across a long and arduous season it would take a gargantuan effort from the Argentine star to deliver across all fronts with regularity.

In Valverde, Barcelona undoubtedly have a very perceptive coach, one who has a keen eye for making the right change at the right time and injecting the correct profile of player into the game from the bench. For now, after weighing up the sporting situation at Camp Nou, a constructive January transfer window is required to pave out their new coach’s long-term vision. The last few months have given Valverde the chance to feel out his players and any deficiencies they may possess, with his consistent results to date ensuring that the club’s board would not consider it a gamble should they spend big money on his behalf.

Valverde’s desire to watch the club’s B team regularly and keep his hand in youth affairs at Barcelona sheds some light on players that might be taking his eye with a view to the future, but a couple of more short-term purchases should define what is expected stylistically in the here and now. Carles Alena, David Costas and Oriol Busquets have found themselves handed opportunities in the first team, but the Blaugrana are still lacking a certain edge.

Paulinho has contributed a more physical, direct element to Barca’s build-up play, but otherwise Valverde’s midfield has been more regulatory than visionary. Everything is safe, risk-averse and ultimately reliant on Messi to spring into life in dangerous areas and scythe the opposition apart.

For a club with the riches that Barcelona possess, such a reliance on one man should be a concern. Dembele’s return to first-team action will be the first window into Barca’s tactical future, but the Frenchman can’t be the new guy in the dressing room for long. For now plan A is getting results, but a secondary blueprint needs to be assembled before the pressure rises and the stakes are considerably upped.