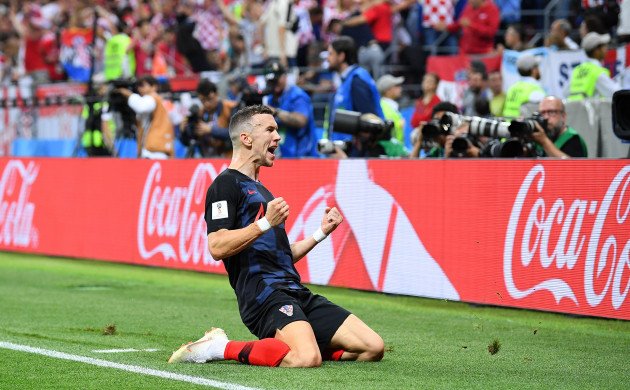 History on Croatia's side as Luka Modric and co. attempt to pull off a shock

"I think this was our best game," Zlatko Dalic nodded. "We played better today than against Argentina."

On paper, Croatia's performance in Wednesday's semi-final did not come as a surprise. This is what is to be reasonably expected of a team featuring players who play their club football at Real Madrid, Barcelona, Juventus, Monaco, Atletico and Liverpool.

But to deliver it in extra time after back-to-back knockout games ended in penalty shootouts is an extraordinary show of toughness. "English journalists, pundits from television, they underestimated Croatia tonight and that was a huge mistake," Luka Modric said, striking a tone reminiscent of Ivan Drago. "All these words from them we take, we were reading and we were saying: 'OK, today we will see who will be tired'."

As a source of motivation, cleverly manipulated by Croatia's coaching staff, it clearly worked. The assumption fatigue would affect this group of players was not entirely ludicrous. As if the physical drain of playing 120 minutes in consecutive games wasn't already enough, the mental toll of penalties can hardly have been insignificant. That Croatia were able to overcome it and play as well as they did from the half-hour mark of the first half is evidence of stunning resilience.

Danijel Subasic shrugged off the muscle problems that afflicted him against Russia. Sime Vrsaljko, a major doubt for the game, not only started, he proved a huge thorn in England's side and made a crucial goalline clearance from a John Stones header.

In adversity Croatia draw strength. It's not just this side's ability to grit its teeth and play through the pain barrier that impresses. It's the fact that after breezing through a tricky group and finishing on maximum points Croatia have managed to come back from behind in every round of the knockouts. They have picked themselves up, regrouped, and acted as if nothing happened, holding their nerve.

It's tempting to see Modric as the symbol of this mentality. He missed a penalty in extra yime against Denmark but did not allow the mistake to affect him. When the shootout started, Modric didn't shy away from taking one. Frail and gaunt-looking, appearances have rarely been so deceiving. It's hard not to admire the sheer strength of character he showed in stepping up again to bury the hatchet.

Courage distinguishes this Croatia setup. It's enough to think back to October when the Federation fired Ante Cacic and appointed Dalic just three days before Croatia's pivotal final qualifier against Ukraine. The Italians look back on that decision and wish they had taken the same drastic action with Giampiero Ventura. The shock to the system worked. Croatia won in Kiev and then made light-work of Greece in the play-offs. Now they find themselves in a World Cup final, eclipsing the legends of 1998 who were of course eliminated by Sunday's opponents, France.

For a nation of four and a half million people to be this close to the pinnacle of international football is extraordinary. Croatia are the smallest country to reach the World Cup final since Uruguay in 1950 and we all know what happened then; the Maracanazo, one of the great upsets of all-time.

The pressure rests on France's shoulders just as it did two years ago, when Portugal overcame Cristiano Ronaldo's early injury and silenced Paris, making the open-top bus laid on by the FFF for a triumphant drive up and down the Champs Élysées redundant. Didier Deschamps' side has shown a maturity beyond its years in Russia. While the Argentina game remains the most exhilarating performance of and otherwise minimalist run to the final, the control France demonstrated against Uruguay and Belgium only makes their status as favourites more credible.

Twenty years on from 1998 Deschamps can become only the third individual to have won the World Cup as both a player and manager. It would represent sweet vindication for the former midfield water carrier after all the criticism he has had to endure over the last two years. But pardon me if my imagination is captured by the following trend. A first-time winner has lifted the World Cup every two decades since 1958. Is it Croatia's turn? The odds are stacked against them. But history is on their side.