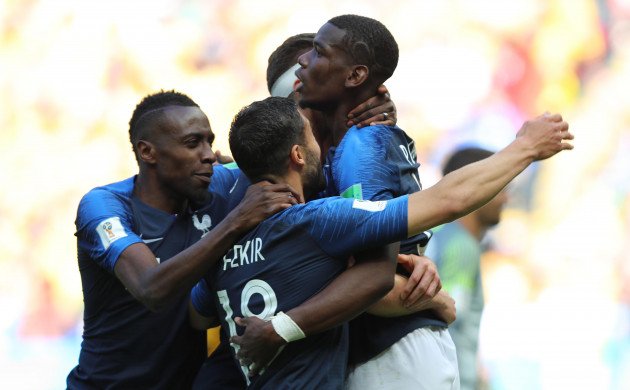 France get off to stuttering start, but don't write them off yet

Perhaps it will fade as the tournament grows older and gradually be buried under the sands of time, but with the first week of the World Cup still yet to draw to a close Christian Cueva's penalty miss still lingers.

The quick short steps and initial hunched body position. The ball flying up and away, conversely plunging the 26-year-old Sao Paulo playmaker into the depths of despair.

Coming on the stroke of half-time, poor Cueva was forced to dwell on his mistake in the interval. Tears flowed at the end as Peru's 15-game unbeaten run ended as their first World Cup in 36 years began. It felt thoroughly undeserved.

Denmark's blood was as cold as winter in Copenhagen. They kept their emotions on ice, eeking out a win against the run of play in clinical fashion. "Peru are an excellent team and definitely deserved more, Age Hareide confessed. "But that's football." As with life, it's not always fair. The best team doesn't always win.

But Peru and Cueva should not be discouraged. Thursday's game against France looks like a mismatch on paper. Didier Deschamps has as talent-rich a squad as anyone at the World Cup and France have been made one of the favourites on potential alone. But as we saw against Australia there is a difference between France on FIFA and in real life. The gap between perception and reality is not insignificant.

France were a letdown against Australia. But only to those who haven't watched them regularly under Didier Deschamps. Les Bleus lost to Sweden in qualifying and drew 0-0 with Luxembourg. More is expected of a team with such an embarrassment of riches and managing that expectation is one of Deschamps' biggest challenges.

On Saturday he pushed back against the negative reaction the performance provoked. First and foremost France had won. "I don't think it was so disastrous," he countered. Deschamps then gave a quick history lesson. France don't usually win their opening game. Before Saturday's match it had happened just once in their last four appearances at the World Cup. Subsequent results also cast France's narrow, unconvincing win in a slightly better light. Germany lost. Argentina and Brazil drew. England needed a last-minute goal to beat Tunisia.

As Gary Lineker tweeted on Monday night: "Never ceases to amaze me how easy some folk think World Cup football is. Have you watched all the so-called big teams? It ain’t that easy, especially against tough defensive opposition. I suppose those that are so critical haven’t been there, though. Night all."

No doubt Deschamps shares Lineker's sentiment. The perception deficit remains a source of considerable irritation. Take for instance the team Deschamps selected at the weekend. We can debate its efficacy. But what should not pass unobserved is the youthfulness of the team.

It was the youngest France have fielded at a World Cup since 1930. Eight members of the starting XI were 25 or younger. France are keen that a lack of experience is not used as an excuse any more than the length of the grass and the heat in Kazan on Saturday. Still Corentin Tolisso admitted: "In terms of atmosphere, I noticed a difference between the World Cup and the games we usually play." He can't have been the only one.

Another wave of talent has emerged since France reached the Euros, adding to the hype around the team. There are 14 new faces in this squad, which doesn't lend itself to continuity and helps explain why Deschamps still appears to be figuring out his best team.

While every manager would like to have as many quality players to call on as possible it can cause confusion, particularly when you're transitioning from one generation to another. This is Deschamps' third major tournament in charge and it's always difficult to strike a balance between knowing what has worked well for you in the past and integrating new pieces which may be better served in a different setup.

Arguably no one symbolises this conflict better than Olivier Giroud. France get the best out of Antoine Griezmann when he is playing just off the Chelsea striker. The decision to move Griezou inside and switch from 4-3-3 to 4-4-2 was the catalyst behind France's run to the final of the Euros two years ago. But when you now have players with significantly higher ceilings than Giroud at your disposal, players like Kylian Mbappe and Ousmane Dembele, there is an obligation to find a solution that includes them.

It's early days but it's not clicking for France at the moment. VAR and an own-goal ultimately saved them against Australia. For all the publicity about their unprecedented depth, the cover for Monaco's old full-back tandem of Benjamin Mendy and Djibril Sidibe is hardly like-for-like. While Lucas Hernandez often doubles in that role for Atletico Madrid, Benjamin Pavard, the Stuttgart centre-back, looked out of his comfort zone when high up the pitch on Saturday.

Of course, France don't need to be more than the sum of their parts to overcome Peru. A moment of brilliance from one of their absurdly skilled individuals will likely be enough for them to prevail. But the uncertainty and lack of cohesion certainly works in Peru's favour.

Outside South America they remain something of an unknown quantity. Only five of Ricardo Gareca's squad play their club football in Europe. At time against they look positively electric Denmark. Containing them wasn't easy. Peru often had the Danes on the run.

Whether the same approach will produce a different result against France remains to be seen. Peru afforded Denmark more space than Australia conceded to France. A lot will depend on their ability to bring the same energy and, most important of all, convert the chances they create. Only then will the tracks Cueva's tears transform into a pathway to the knockout stage.