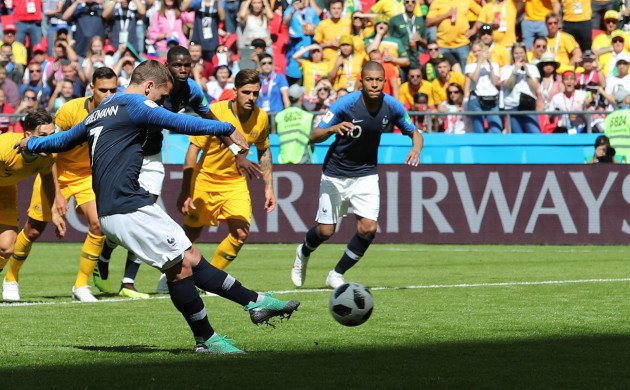 France fail to convince but still find way past Australia

Below are four talking points from Group C’s opener at the Kazan Arena.

1. France off to winning – but unconvincing – start

As one of the pre-tournament favourites to lift the trophy, France were expected to ease past Australia here. Didier Deschamps’ men began brightly with four shots on target in the opening eight minutes, but they were unable to build on that positive start and faded very quickly.

A front three of Antoine Griezmann, Ousmane Dembele and Kylian Mbappe looked glorious on paper, but there was little in the way of combination play between the trio, whose frequent interchanging was dealt with comfortably by Australia. A Griezmann penalty gave them the lead before Mile Jedinak equalised from the spot, and there was a large chunk of good fortune to their second, albeit after a rare instance of quick, sharp passing between a number of French players.

Australia were typically hard-working and well organised throughout this encounter, and they were unfortunate to leave empty-handed. Bert van Marwijk’s side hassled and harried their opponents, ensuring they did not have time to get their heads up and pick their passes. It was also interesting to see them play out from the back rather than punting hopeful balls in the direction of Andrew Nabbout, which would have resulted in frequent turnovers and put their backline under more pressure.

The Socceroos ran out of legs as they chased a second equaliser late on, but they can be proud of their performance against a side jam-packed with top-class talent.

3. Giroud could start France’s next game

Olivier Giroud is a favourite of Deschamps, but he started on the bench here. Mbappe was the man deployed through the middle and tested Australia with some runs in behind early on, but neither he nor Griezmann or Dembele were at their sharpest.

It would not be a surprise to see the Chelsea frontman come into the side for Thursday’s clash against Peru, with one of Mbappe or Dembele likely to make way. There is no doubt that each member of the front three who started on Saturday is extremely gifted, but for the sake of balance it may be wise for Deschamps to switch things up next time out.

4. Australia not out of the equation yet

A point against France would have been a fantastic way for Australia to start their World Cup campaign, but their fate was never likely to be defined by how they got on here. Meetings with Peru and Denmark will be much more pivotal to their chances of progression, and Van Marwijk must ensure his players are not too downhearted after this narrow defeat.

The Socceroos will take a similar approach in their next two games, at least one of which they will have to win. They remain underdogs to advance to the round of 16, but Australia should not be written off just yet.