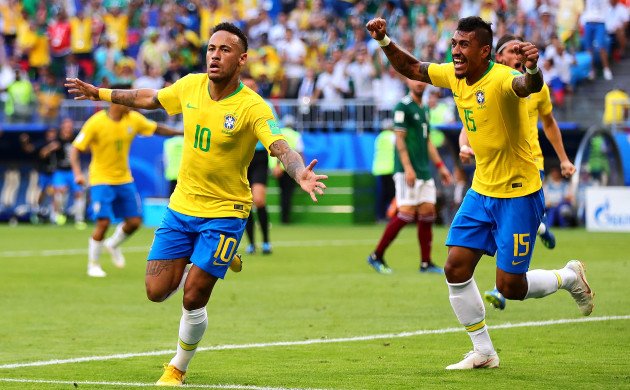 At the start of the World Cup, I was of the opinion that the competition would build towards one semi-final of France and Brazil, and another of Germany against Spain.

Let’s just whisper it amongst ourselves, but the events of the last three weeks have somewhat diminished my faith in the second of those confrontations. But going into Friday’s quarter-finals, substantial reasons remain to believe that France and Brazil will contest a place in the final.

The French will not have it easy – no one does against Uruguay. But they have more attacking resources to deploy against the resilient Uruguayans than Portugal had in the previous round. Uruguay had to dig very deep to hold off the Portuguese. Without Edinson Cavani, the task might just be too great against the French.

But if Friday looks set to start with a tense, tight and dramatic struggle, the fireworks could be reserved for the second game of the day, when Brazil take on the team widely known as ‘the golden Belgian generation.’

Some would say that this is a meeting of two well balanced sides. And, to be fair, there is a far more even distribution of firepower than in any of the previous Brazil games. Tite and his men now come up against the formidable combination of Kevin De Bruyne, Eden Hazard, Romelu Lukaku and other big name stars of top=class European club football. If the Mexican attack could bark, then the Belgian can bite as well. It will indeed be fascinating to see the contest between these players and the Brazilian defence.

But therein lies the imbalance. Because so far the Brazil defence have hardly looked like conceding a goal, even in those passages of play when the opposition have been in the ascendancy. The only goal Brazil have let in came from a corner in the opening game against Switzerland, and seemed to be aided by a little push on centre back Miranda. That aside, goalkeeper Alisson has barely had a shot to save.

The Belgians, on the other hand, have looked embarrassingly porous – even at times during the first half against Panama, and certainly during the second half against Japan, when they went two goals down. It was impossible to watch the Japan game without jumping to a key question for Friday’s game: how on earth will this defensive unit hold the Brazilians in Kazan?

Belgium’s problem would appear to be less one of individual names, more one of collective organisation. Their interpretation of the back three system looks rigid. All too easily the three centre-backs are marking one man. The wing-backs are left with huge spaces to cover, and can at times fall into the trap of the position in a badly organised side – of being defenders when the team is attacking, and attackers when the team is defending.

Should they line up this way, then Brazil’s centre-forward Gabriel Jesus will keep the centre-backs engaged, while in front of the defensive line huge spaces will open up for Neymar, Phillippe Coutinho and William – with Paulinho judging the moment to burst into the attacking line.

In the time between the two games, is Belgium coach Roberto Martinez capable – or willing – to set up his defence in a different way? He saved himself by switching to a back four against Japan. Belgium seem to lack full backs to look entirely comfortable playing this way, but it could be a solution that offers more defensive solidity.

Martinez may also be hoping that his attacking resources can alter the balance. Brazil have oscillated during the course of the competition, and have bene at their best when they have been relaxed. Going a goal down in a knock out game would bring entirely new pressures to bear. How would the team react?

And Belgium’s coach may be in for a little bit of help from the gods of football – who were certainly cheering for the other side the last time these teams met in a World Cup. Belgium had great reason to feel aggrieved after their 2-0 second-round defeat back in 2002. They seemed to have a perfectly fair goal ruled out in the first half – and then saw Brazil take the lead with just over 20 minutes to go when Rivaldo’s shot took a cruel deflection. Over the 90 minutes the Belgians could claim to have been the better team. Certainly their performance shook the Brazilians, who replaced Juninho with the more defensive minded Kleberson for the nest game.

And so if the gods of football are in mind to even things up, then fortune could fall Belgium’s way in Kazan. Failing that, the team with the better balance between attack and defence should prevail, which makes Brazil strong favourites.