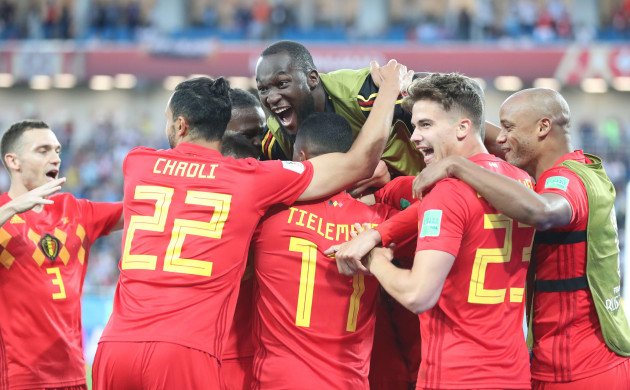 Roberto Martinez didn't wish to discuss tactics on Monday night. The opening question in his post-match press conference raised understandable concerns about Belgium's 3-4-2-1, its "dangers" and whether he might consider a change ahead of Friday's quarter-final against Brazil. "Today is not the day to talk about the system," Martinez said.
Raising it as an issue was apparently "unfair". More attention should instead be given to the positives of the performance, he felt. After all, Belgium became the first team in 48 years to come back and win from 2-0 down at the World Cup. And they didn't need extra-time.
Regardless of what you make of Japan, it's a rare feat and underlines the progress Belgium have made in the last two years. The team reacted in a way it didn't against Wales at the Euros. Belgium did not resign themselves to their fate. They held their nerve and kept going, turning the result around.
Belief in their ability to do so perhaps comes from the knowledge that this team has goals in it. Joint top scorers in qualifying, Belgium have been able to carry that into the World Cup with an ease that has escaped most other teams. Belgium scored three times in 25 minutes to shatter Japanese dreams and the truth is it could have been more. Eden Hazard hit the post and Eiji Kawashima had to make a double save to keep his team in it just four minutes from the end.
Not for the first time, the team had help from the bench. This was a feature of Belgium's warm-up games. Michy Batshuayi came on and scored against Costa Rica, as he would against Tunisia. Marouane Fellaini bagged a goal as a sub against Egypt, as he would against Japan. Nacer Chadli did the same on Monday night, finishing the Blue Samurai off with a 94th minute winner. Scoff all you want at the calibre of opposition Belgium have faced, but it's impressive nonetheless to have had nine different players on the scoresheet thus far.
A big part of that is down to the variety of options at Martinez's disposal. Fellaini's height helped Belgium create mismatches at set-pieces against a short Japan side, so too did Chadli. At 6ft 2in he made the Red Devils taller at corners too. Most of all, though, he hurt Japan with his dribbling. Fresh legs are enabling Belgium to finish games strongly and make the most of their opponent's fading condition. All but one of their 10 goals have come in the second half and Belgium have now struck twice after the 90th minute. Chadli's winner - a fantastic six-second counter attack from one box to the other - emphasised Belgium's growing reputation as a Duracel team.

Nevertheless, doubts remain. While Vincent Kompany is back, shipping two goals to Tunisia and another two to Japan must come as a concern. Belgium no longer play off the cuff like they did under Marc Wilmots. There is more structure now. But within it are flaws that could cost Belgium. Japan pressed with intelligence in Rostov. Axel Witsel had to leave his position in central midfield and play on the right to get open for a pass from one of Belgium's centre-backs. It left Kevin De Bruyne isolated and emptied a midfield with no obvious destroyer to screen the defence.
The wing-backs left Belgium exposed too. Without the ball, Thomas Meunier and Yannick Ferreira Carrasco tend to fall in line with Vertonghen, Kompany and Toby Alderweireld. Belgium were often passive, particularly on second balls, and allowed Japan time and space in front of them. Meanwhile in possession, Japan noticed there was space in behind that could be exploited with quick transition play. We saw Brazil cut through Switzerland on occasion in their opening game, moving from one end of the pitch to the other in three or four passes. Expect more of that in Kazan on Friday.
When assessing Belgium's chances, the misgivings De Bruyne expressed about the system after a 3-3 draw with Mexico last November still come to mind. "We are playing a system that is very defensive, but filled with many attacking players who want the ball," he explained to Het Laatste Niewus. "Then you get a bit of a problem, like on Friday against Mexico, a match in which we had very little ball possession and everyone in a system that does not really suit. We now know that something has to be changed against these teams."
Belgium can't expect to have as much of the ball against Brazil as they've had in the tournament so far. How they cope without it will have a big say in determining whether they reach the semi-final or not. Adding an extra body in midfield to make the team more robust is an idea.
"Their system made our five defenders deep and we were swimming in midfield - it was five against seven," De Bruyne said after the Mexico game. One presumes he does not want to find himself in the same situation against Brazil.
It's make or break for this team. Asked if it's a decisive match for this generation of Belgium players, Kompany said: "Yes. But we are not afraid... We will look them straight in the eyes." When the full-time whistle blows, one of them will be in tears.