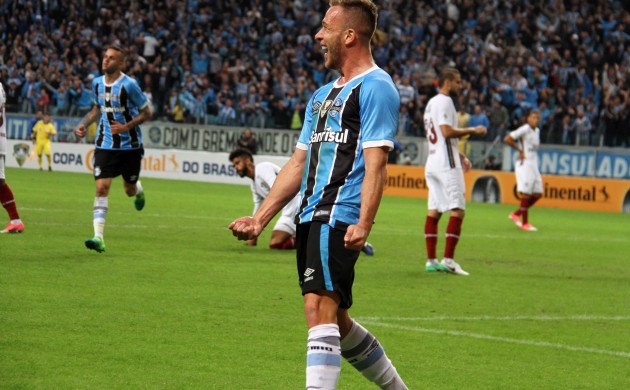 A leading contender for the outstanding footballing moment of last week was Lionel Messi’s second goal for Barcelona in the 3-0 win over Juventus, when he cut in on two rival defenders and found space in front of a third to rifle a shot past Gianluigi Buffon.

As impressive as the finish was the pass that set it up. Andres Iniesta slid a delightful diagonal ball into Messi’s path; it was perfectly weighted for him to collect, use the momentum on the pass to create space to his right, and then shift inside onto that magical left foot. As so often, Iniesta and Messi were thinking and operating as one force.

Everyone, of course, would love a Messi in their side. Of all the national teams in the world, Brazil perhaps need him least – they can count on the extraordinary talent of Neymar, Phillippe Coutinho, Gabriel Jesus and others. But what they have missed – and for some time now – is a midfielder capable of controlling the game like Iniesta. Which makes the appearance of Arthur in the latest Brazil squad so interesting.

The little midfielder turned 21 last month. He has come through the youth ranks at Gremio, in the southern city of Porto Alegre, and this is his debut year as a regular first-team player. He is making a massive impression. A vital part of what is currently the most eye-pleasing team in Brazil, Arthur has much about him that recalls a young Iniesta.

He has a similar build and balance, with the capacity to play and find interesting angles for passes in a full arc of 360 degrees. He can thus bring fluidity to the game. Where much of the Brazilian game has become about straight-line running, Arthur allows the ball to move. His passing is reliable and imaginative. And he possesses that little burst of acceleration that sends him on skipping forward runs which take out opposition defenders.

This year’s edition of the Copa Libertadores, South America’s Champions League, has provided him with his platform. The breakthrough game came late in April. Gremio took a largely reserve side to Paraguay for a game against Guarani. Arthur bossed proceedings as if he had been doing it for years. Gremio came back with a 1-1 draw, and with a young midfielder who had made himself very hard to leave out of a full-strength XI.

And he has now made himself impossible to leave out of the Brazil squad to face Bolivia and Chile in next month’s final two rounds of World Cup qualification. Any doubts in the mind of national team coach Tite were resolved last Wednesday, when he went along to the stadium in Rio to watch the first leg of the Libertadores quarter-final between Botafogo and Gremio.

Brazil’s coach is on the lookout for young talent. After his team coasted to qualification he wants to avoid complacency, promote competition and unearth any rough diamonds he can find – as happened with such success when he went with Gabriel Jesus as first choice centre-forward a year ago, and found a solution to what had been a problem position.

Central midfield is another zone on the field where Brazil are not blessed with an abundance of resources. Arthur was on his radar. But how would the little midfielder come through the biggest game of his young career? The circumstances were daunting - away from home, a full stadium, an intense atmosphere and Gremio without Luan, their main attacking star. Arthur would have to take on extra responsibility – and he did not disappoint.

In a 0-0 draw he was by some distance the best player on the field, always present, often creative, rarely giving the ball away. Tite went away convinced. 1970 great Tostao, always the wisest voice in Brazilian football, had been calling for Arthur to be included in the national team squad, and on Friday his wish came true.

Arthur’s rapid promotion may well mean that Gremio fans will not have much longer to appreciate their budding midfield maestro. According to Arthur’s agent, an offer came in from England on the final day of the transfer window. Now Arthur has gained international recognition, the price is surely going up.