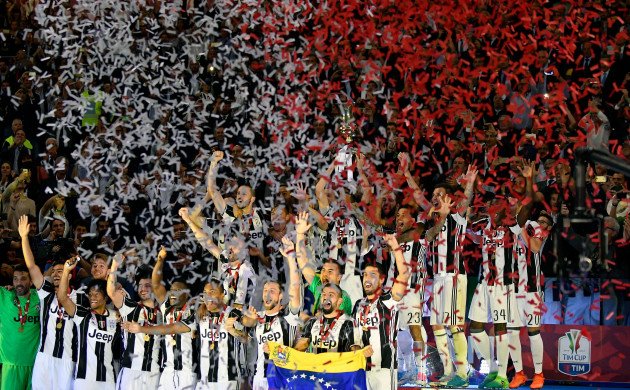 Juventus still the team to beat in Serie A, but this season's title race could be the tightest in years

Remember this time last year when Juventus supposedly ‘killed’ the league by signing Gonzalo Higuain and Miralem Pjanic from Napoli and Roma. One of the hot-takes of the summer in Italy has it that they have suddenly revived it by selling Leonardo Bonucci to Milan. It has been portrayed as a taste of their own medicine, a game-changer.

Bonucci claims to be “hungrier than ever,” presumably to stick it to Massimiliano Allegri, and perhaps not coincidentally granted an interview to La Gazzetta just days after his former club’s defeat by Lazio in the Italian Super Cup in which he revealed his intention “to do for Milan what Pirlo did for Juventus” when he swapped sides in 2011. In other words, be the hinge on which the balance of power swings in Italy.

It’s fair to say the signing of Bonucci has altered our assessment of Milan, Juventus and how we view the title race as a whole. Milan have not just done themselves a favour. Napoli, Inter and Roma all seem grateful to them for at least creating the impression Juventus are now vulnerable.

It’s an impression Antonio Conte created when he resigned at the beginning of pre-season three years ago. And again when Andrea Pirlo, Arturo Vidal and Carlos Tevez all left the following summer. In case you didn’t notice, an unflappable Juventus kept winning and have shown an ability to move on, rebuild and remain competitive in a manner that is reminiscent of the work Sir Alex Ferguson did at Manchester United. Except with Juventus it’s largely institutional and much of the credit is owed to president Andrea Agnelli, general manager Beppe Marotta, director of sport Fabio Paratici and Stan Smith-wearing member of the board Pavel Nedved.

But to many the Bonucci transfer does have a different feel to it, not least because unlike with the aforementioned players, not to mention Paul Pogba and Alvaro Morata, Juventus weren’t strengthening a rival. The defence has been the one constant about Juventus over the last six years, the bedrock of their success and ultimately what has kept them ahead of the chasing pack. It's been the league’s best for six years, whereas the attack, which has been the focus of their recruitment this summer, has held that honour on just two occasions in that time.

The 10 goals conceded in five games over the course of the summer has got Juventus fans worried and rivals supporters hopeful. The number of shots they’re allowing, as Allegri himself pointed out at the weekend, is also cause for alarm. But can it all be put down to a Bonucci-shaped hole in their defence or is it more nuanced than that?

Giorgio Chiellini believes its the latter. He puts Juventus’ frailties down to spending more time travelling than training this summer, and the paradoxical mix of heavy legs from double sessions and a slow-burn fitness regime designed to help Juventus peak later in the year so they’re fresh when its crunch time in the spring. The season is a marathon, not a sprint.

The other line espoused by Allegri and Paulo Dybala is that, at the moment, Juventus have an attitude problem. Without great sacrifice the 4-2-3-1 they settled on in January is too top-heavy a system to work. Rediscover the same levels of concentration and application we saw earlier this year, however, and Juventus will surely tighten up. After all, they did win nine of 10 games without Bonucci last season.

Reason enough to downplay his influence? Absolutely not. Bonucci was arguably more symbolic of the mentality at Juventus than any other player in this era. He was one of the players you looked to when the going got tough and he very often delivered in the biggest games. He got into opponents' heads and helped Juventus win games in the tunnel. At 30, it must also be remembered that Bonucci was the youngest member of the BBC and clocked up more minutes than any other outfield Juventus player last season. When he wasn’t talking back to his manager and getting dropped because of it, Bonucci was durable and reliable.

Can the same be said of his teammates? Andrea Barzagli is 36, Giorgio Chiellini and Mehdi Benatia are injury-prone and Daniele Rugani is super talented but still yet to really impose himself in the minds of opponents and fans. Juventus don’t look like panicking even after the Super Cup, when Benatia was given an early bath to wash away the sins of two Lazio goals. The papers wondered if the cracks might cause Juventus to reflect and decide to add another centre-back before the end of the summer, but it seems more likely they'll simply wait a year given Mattia Caldara is due to join from Atalanta next season.

In the meantime the biggest challenge of the post-Bonucci era is how Juventus go about playing out from the back. In Bonucci's day at the J Stadium, he would either step out and playmake himself, striding past the man-marked Pirlo, or ping a long diagonal out to a striker or Mario Mandzukic on the left. Juventus no longer have the same luxury or variety. At least not in one defender. Allegri has said he will not ask Chiellini, Rugani, Barzagli or Benatia to play like Bonucci simply because there is only one Bonucci. He has a unique skillset. It’d be like asking Mattia de Sciglio to play like Dani Alves…

In pre-season, Pjanic has dropped between the centre-backs in an effort to build the play himself. The results have not been encouraging. Lazio must clearly have watched the friendly against Spurs at Wembley because they saw how ill at ease Juventus were in this phase.

Lazio’s opening goal last weekend was a case in point. The centre-backs split to accommodate Pjanic, he stepped out of the defence and played a pass to Juan Cuadrado that Lucas Leiva read like the a bad airport novel. With Benatia and Chiellini out of position, Leiva played Ciro Immobile through the middle with a pass that had so much cutting edge to it, it felt like a knife through the heart. Desperate times brought desperate measures and Buffon, racing off his line, was late to Immobile and gave away a penalty. Juventus have been conceding from situations like that all summer.

The adjustments Allegri made in-game were interesting because they perhaps point to how Juve will play against Cagliari on Saturday. Pjanic stayed alongside Khedira ensuring the defence, midfield and attack were always connected. Too spread out in the first half, Gonzalo Higuain was left isolated and Lazio had wide open spaces to play in. Now Juventus looked to Alex Sandro to carry the ball upfield or Paulo Dybala to drop deep. Comfortable with his back to goal, Juventus' new No.10 pulled opponents out of position and disrupted Lazio’s shape to his team’s advantage. He took over their playmaking and the game.

In the short-term this could be the way to go. However, the signing of Blaise Matuidi for a bargain £18.2m also hints at a return to three in midfield, which will perhaps provide the defence with more cover. But is a move to 4-3-3 really on the cards? It leaves Douglas Costa, Dybala, Federico Bernardeschi, Mario Mandzukic and Cuadrado competing for two places.

Maybe a Christmas Tree is more likely. Either way, Allegri has options - which is exactly what he loves. Juventus have bought several Swiss Army Knife players. Costa can play across the attack, as can Bernardeschi, while Matuidi has played in Mandzukic’s role in a 4-2-3-1 as well as high and wide in a 4-3-3. De Sciglio can play left and right, as can Spinazzola if he arrives from Atalanta.

More flex. More goals. More skill and technique. This is where Juventus wanted to get better. If the defence regresses, though, the gap between them and their rivals will close this season.

And what of the Juventus state of mind, the mentality that separated Juventus them from Roma and Napoli, the psychological edge? Bonucci was a big exponent of that too. Now he's gone. Make no mistake, the Old Lady remain favourites to win a Lyon-like seven straight titles, but this promises to be the closest, most competitive title race in years.