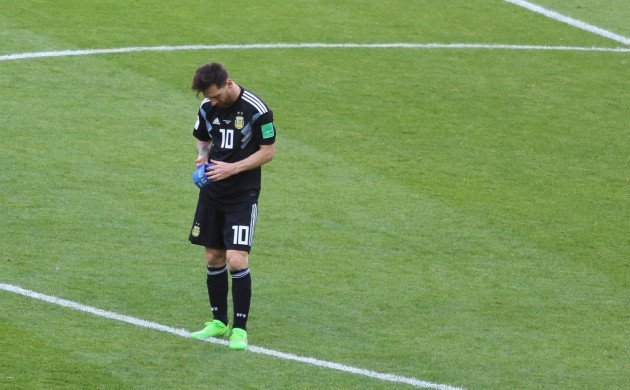 After crushing Croatia defeat, where do Argentina go from here?

Argentina’s 3-0 defeat by Croatia has taken their destiny in this World Cup out of their hands and provided the competition with its first real “heritage team in crisis” narrative. Sure, Germany lost to Mexico but can still feel reasonably confident of a place in the knockout phase, even if they have to face Brazil sooner than would have been ideal.

For Argentina, the reality is that a lack of quality in key areas has meant that even with star power in the attacking slots, the team as a whole has not been good enough. The inability to break down Iceland could possibly have been seen as a blip, and that performance in itself wasn’t so bad. They struggled to create high quality chances inside the box, and Lionel Messi’s decisive penalty miss meant that their one golden opportunity to win that game passed them by.

Beyond that Messi took 10 further shots, nine from longer range and a blocked effort from wide. He tried to carry the attack, but it just wasn’t his day. Iceland were resolute and the 1-1 draw was celebrated far more heartily in Reykjavik than Buenos Aires.

Against a fundamentally better team in Croatia, the system that Jorge Sampaoli had devised faltered and failed. The first half was fairly quiet but the shape of Argentina’s play in and out of possession was clear: with the ball the team operated almost in two banks of five, and the defence often exchanged passes while the nominal attackers pushed right up against the Croatian backline.

Occasionally one attacker dropped to facilitate moving the ball through to the forwards, but they went direct at least as often. Argentina’s patience in possession meant they took risks with the ball close to their own goal, and Willy Caballero’s error was a direct result of the desire to keep passing. As he stubbed the ball to Ante Rebic, who until that point had been having a wild and frustrating evening, the necessity of time and practice zoomed into focus. Caballero warmed Chelsea’s bench for most of this season, and his conditioning to play in this style was far from complete. Rebic returned fire and the Croatians led.

In that very instant, Argentina’s World Cup hopes changed and their human response was inadequate. As the goal went in Messi was walking slowly back to his half. The preceding failed Argentinian attack had seen Sergio Agüero shoot straight at the keeper and the goal came so quickly, that Messi had yet to regain a useful position on the pitch.

As Croatia celebrated, he continued to walk towards the centre circle, communicating with nobody. Almost to a man his teammates stood stationary and blank faced. Defender Nicolás Tagliafico was the only player to look to rouse his countrymen to respond and there and then Argentina looked like a team that didn’t want to be there.

Out of possession, their idea was as clear as with the ball. A quick press saw three or four Argentinians regularly harass the ball carrier and his nearby teammates, and Argentina did create turnovers this way. It was also evident that despite the scoreline and the apathetic body language, they generally continued to play as their coach wanted them to late into the game.

Still came the sideways patient passing, looking for breaks. Still came the quick responses to losing the ball, as the team shuffled across the pitch trying to respond. It just wasn’t enough.

Among all this Messi remained with a different remit. His ability to influence games without continual physical effort is undeniable, and here once more it was clear that he had not been asked to join the press outside any zone he inhabited. But when a system so obviously gives a free pass to even the world’s best player for workload, it needs to make sure that the workforce are capable of supplying him.

Scarcely has Messi been so peripheral as he was here. Just one shot all night was a meek return, and it was hard to ascertain if either he didn’t have the instruction or inclination to endeavour to find more and truly drive his team.

On the back of such a heavy defeat, it’s hard to see how Argentina can build anything in this tournament, even if the cards somehow fall their way. The midfield is entirely lacking in quality, and too many older journeymen populate the squad. Starting 34-year-old Javier Mascherano and 32 year old Enzo Pérez in central midfield to play a solid pressing system against a midfield as illustrious as Croatia’s defies all logic, and the bruising to morale will be tough to overcome.

All the post match narrative will of course land on Messi, and Sampaoli will need a miracle to stay in the job if, as expected, this is the end of the road for the team in this world Cup. It’s a shame, because it was probably an impossible task to get this squad to play the football he wanted, and he will carry the can for that. Messi may return in four years for one last hurrah, but few who were on the pitch with him on Thursday night are likely to join him.