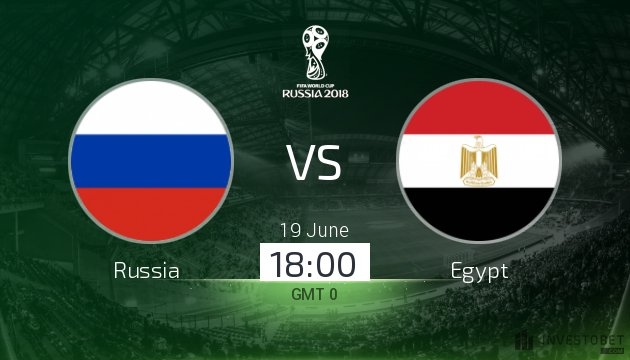 Russia made light work of a flaky Saudi Arabia in the opening game by scoring five times without reply, which means they now have Egypt right where they want them - in the last-chance saloon with almost no margin for error. Expect the hosts to play this one by the book and pick the Pharaohs off when the time is right to secure qualification for the knockout stage with a game to spare.

The Russians couldn’t have landed a better group had FIFA allowed Vladimir Putin to choose the opposition himself and now events have transpired to illustrate precisely why the schedule mattered as well. In tonking Juan Antonio Pizzi’s men by such a big margin, they have put the onus on Egypt to attack here - and that’s the last thing Hector Cuper would want.

The North Africans were dealt a huge blow to their World Cup preparations when Mohamed Salah picked up a shoulder injury in the Champions League final and the swashbuckling Liverpool winger lost his race against time to be ready for their first outing against Uruguay, staying rooted to the bench for the 90 minutes with his colleagues seemingly on course for a valuable point.

However, a late header from Jose Gimenez grabbed a deserved win for La Celeste as they stepped on the gas in the closing stages, which means a point here does Egypt no favours. As bad as Saudi Arabia are, it’s hard to imagine them crumbling in the same manner against a team who netted only eight goals across six qualifying matches in a group that contained Congo and Uganda.

Salah will surely start this time around - whether he’s 100 per cent or not - and the modus operandi is unlikely to change significantly because this team isn’t really versed in doing anything other than sitting deep and looking to spring the opposition with long balls to their bushy-haired talisman on the counter. Without that strategy, they wouldn’t be here.

The trouble is, Russia are highly unlikely to play ball in that regard. Any team that allows Saudi Arabia 60 per cent possession in a showpiece curtain raiser watched by a global audience of several hundred million is hardly going to be cavalier when they have a three-point cushion to protect against a team 25 places further up the FIFA rankings.

If style was a priority, that first game was the moment for Stanislav Cherchesov’s men to charm the Russian public. As it was, they simply covered up their deficiencies as best they could and waited for the Saudis to reveal their own inadequacies, the landslide result prompting a huge sigh of relief among those who feared the worst show on record by a host nation.

Without the same tensions leading into this game, the same strategy could pay big dividends once again. If you think Egypt can play their way through a congested midfield and break down a defensive wall, you’re essentially banking on Salah arriving in tip-top condition and tearing it up in a game that might be too pedestrian for him to showcase his finest attributes.

Russia to beat Egypt at 5/4