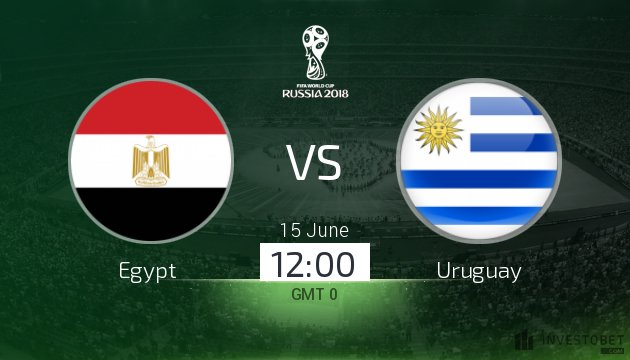 Mo Salah returned to training with Egypt on Wednesday but appears to be losing his race against time to be fit for this Group A opener, with Tuesday’s second outing against hosts Russia said to be a more realistic target. Either way, it’s hard to see beyond Uruguay putting their best foot forward here, in a section they are widely expected to dominate.

La Celeste are blessed with arguably the best strike force at the tournament with Luis Suarez and Edison Cavani leading the line in a 4-4-2. They aren’t just technically gifted and clinical individually, they also work hard at their partnership and generally complement each other well. So they should be fancied to stretch a miserly Pharoahs defence to the limit.

The breakthrough is unlikely to come cheaply, considering how the Egyptians usually sit deep with 10 bodies behind the ball and rely on Salah to weave some individual magic at the other end. Only twice in 32 matches under Hector Cuper have they conceded more than a solitary strike. But this ought to be a significant step up in class for a pedestrian centre-back pairing.

A new, more mobile midfield breathed fresh life into Uruguay towards the end of a patchy qualifying campaign, as Oscar Tabarez reached a tipping point with the plodders in his engine room and turned towards some blossoming talents from the production line he revamped in the late 2000s, making the team more expansive and adventurous at a stroke.

Matias Vecino and Rodrigo Bentancur should ensure that Uruguay dominate the ball, but it’s not in the middle of the park where this game is likely to be won and lost. Ultimately, Cavani and Suarez against Ahmed Hegazi and Ali Gabr is a mismatch at one end, while Diego Godin and Jose Maria Gimenez can easily shackle anyone but Salah at the other.

Even if Salah makes it, we have to question the risk factor and whether he is truly ready, or if he is simply being rushed back for the psychological impact it has on the team. Even at his best, he might only get one or two moments in the entire 90 minutes to make an impact. With that in mind, odds against about Uruguay to win to nil seems like a sensible bet.

One of the recurring problems for Egypt over the past couple of years - and one of the biggest misgivings about them at this tournament in general - is a reported inability to alter the pattern of games once they go behind. Superior opposition such as Uruguay will be aware of this and be encouraged to stay patient, knowing the importance of the first goal.

If Uruguay find an early breakthrough, they could hose up by any margin. If they have to wait a while, then one goal would be satisfactory. Either way, when they line up for the anthems and go through the pre-match handshakes, they can look in the eyes of their opponents and believe, man for man, they can take care of business in fairly routine fashion.