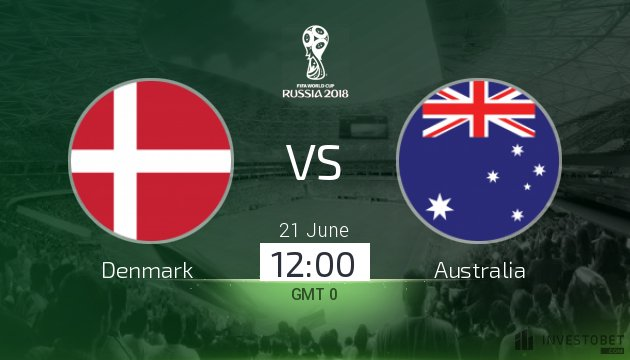 Luck was instrumental in the outcome of both opening matches in Group C. Denmark played the role of party poopers by snatching a barely-deserved win against an enterprising Peru side in Saransk, while earlier that day Australia did more than enough to frustrate France in Kazan, only to be denied a point by a debatable penalty with an hour gone and a deflected goal late on.

Replay both those matches chance for chance a thousand times, and the outcome is different more often than not. So it’s tempting to say the Socceroos deserve a break when they face Age Hareide’s men in the early game on Thursday, that fate has a duty to balance these things out over the next 90 minutes. But we all know that’s not the way it works.

Fortunately, though, Bert van Marwijk’s preparations should be fairly straightforward because the same tactical blueprint that almost thwarted Les Bleus stands an excellent chance of reaping greater reward if replicated here. The big question is whether the Aussies can stick to their task throughout, without allowing the group dynamics to control their emotions.

The one key pattern to emerge from the post-match analysis of that first game was just how often Australia forced Didier Deschamps’ men to go wide, and not in areas where they could really do much damage. Just 22 per cent of the play went through the middle third, with French full backs Benjamin Pavard and Lucas Hernandez seeing more of the ball than anyone else.

France, of course, have an embarrassment of individual riches going forward but issues with cohesion, which Mile Jedinak and Aaron Mooy did an excellent job of exposing by screening the back four with intelligence. On that evidence, it’s easy to imagine them keeping Denmark at arm’s length, for whom Christian Eriksen represents most of the creative threat.

Peru managed to marginalise the Tottenham man for the most part, reducing him to just two attempted through balls in the entire match - albeit one of them teeing up the winning goal for Yussuf Poulsen. Australia might not be quite as ambitious, but doing a job on Eriksen should be within the capabilities of Jedinak and Mooy.

There’s an argument to say Denmark did what they had to do against Peru. They weathered two spells of intense pressure, which accounted for 90 per cent of the edited highlights - one in the opening 15 minutes, and another for 20 minutes after their goal - and for the remainder of the game they were in control and marginally on top.

But even if we credit them for the sedate 55 minutes played on their terms rather than the chaotic 35 played on Peru’s, marginally on top isn’t really good enough. A counter-attacking team should be able to create more against opposition willing to commit so many bodies to their attack and it merely served to illustrate just how much they depend on Eriksen.

The assumption is that Australia will leave fewer gaps to exploit and unless Eriksen can conjure up a moment of magic from distance, the Danes might be found labouring under the limitations of Poulsen and Pione Sisto to make intelligent runs in behind that the likes of Kylian Mbappe and Antoine Griezmann were largely incapable of.

If that proves to be the case, one goal might well be enough for Australia but that must come with an acknowledgement that they are probably reliant on a set play for it to happen. The problems arise later on if they take a dim view of the stalemate that preserves Denmark’s three-point cushion and push beyond their open-play capabilities in pursuit of a winner.