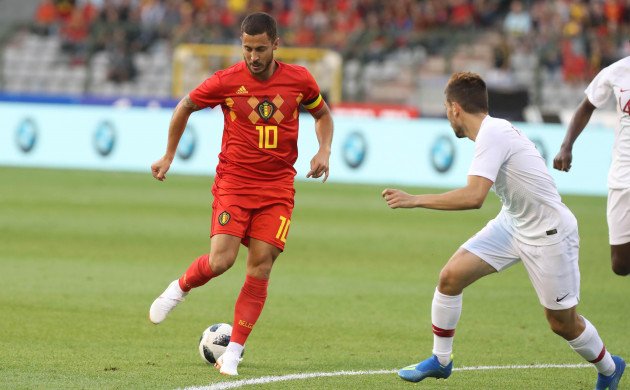 Forever seen as a dark-horse-turned-favourite, it’s time for the Red Devils to do something special. They have the squad, but do they have the manager?

Questions have existed over some parts of the Belgium side in the past, particularly at full-back, but this time around it's the manager. Is ex-Everton boss Roberto Martinez really going to lift the World Cup? Is he going to outsmart the big-name coaches searching for legendary status?

It’s hard to say what their one strength is, because they have so many. They are among the best teams in the tournament without a shadow of a doubt, and come with some exceptional qualities in every position.

Their main strength is experience. This is a team that knows, in their prime, it’s time to make a difference and aim for the final.

The dugout. We like Roberto Martinez, but he is not a great tactician. His desire for playing defenders who lack the qualities he needs from them has been an Achilles heel in previous jobs.

No harm to him, but if Dedryck Boyata has to play an extended period of games and is given the ball too often, then Belgium could struggle. He’s often the weak link in his club side, Celtic, in Europe, and could find the same technical deficiencies make him a target here. Given Vincent Kompany’s injuries, that should be a worry.

Thomas Meunier. The full-back is quality and needs to leave Paris Saint-Germain. Now is the time to show his suitors what he is truly capable of.

Panama have felt like a team that is being powered by the power of fate. Cruel late goals conceded in 2014 ended their dream of appearing in Brazil. Now, another late series of results has got them all the way to the big time.

While the likes of Blas Perez and Roman Torres are no longer the youngsters they once were, Panama are being powered far beyond their means with the sheer joy of adventure.

Panama are a total unknown quantity, and house some very interesting players in their ranks. The likes of Ismael Diaz and Michael Murillo give them youthful pace and craft, while the likes of Alberto Quintero is a solid creative force.

They have goals in Gabriel Torres and Blas Perez, and carry a rich desire to just get in about the opposition and score goals.

Given the toughness of the group they were drawn in, they might struggle to make the kind of impact on a hard to escape group.

Roman Torres is the best player, an MLS Cup winner with Seattle Sounders. However, Gabriel Gomez of Atletico Bucaramanga is a good player, and has been a key player for the team in midfield. If he can get up to speed and perform as he did in qualifying, Panama may surprise some.

Tunisia are one of the most interesting sides in Russia, and make up a uniquely North African contingent that quality from the continent. They are a side that is in a period of major change, with Youssef Msaki ruled out – by far and away their best player – with a major knee injury. They also sacked the coach who got them here in Henryk Kasperczak.

This, though, does give them the chance to really use that flux of change to help them out of the Group. It might be tough, but they have some interesting players.

The need to take the limelight. With Msakni gone, it falls to Wahbi Khazri and Naim Sliti to make the difference. The duo will need to pick up the slack, having often deferred to the outstanding Msakni on many occasions. With their star man gone, that desire to step up and be the one to help their nation make an impact in Russia will be massive.

The attacking nature of their play could be their undoing. While full-back Ali Maaloul is outstanding going forward, the Al Ahly man often leaves space in behind – space that England and Belgium are far more likely to exploit. If they keep pouring forward as they do, then they might struggle.

With Msakni gone, we recommend that you keep an eye on the impressive Sliti. Sliti plays for Dijon, on loan from Lille, and is talent desperate to finally break out. This is his chance.

For once, England are rocking up to a tournament with three things needed to win. One, they have youthful effervescence. Two, they have pace and options in key areas. Three, they lack a public expecting results and a team that has an overinflated sense of its self-worth.

Even for the neutral, this England team is easy to like. Often in the past they would squander immense quality with tactical immaturity or an ego attack, forcing them to underestimate quality opposition. This year, though, things feel a little different.

A new and interesting style of play rarely seen by England in recent years. Gone are the days of 4-4-2, and gone are the days of expecting solid pros like Gareth Barry to win the World Cup. In the place of mediocrity and egoism is a team that loves to play silky passing football, has some of the best pure pace in the tournament and has a striker that is a good tournament away from achieving world-class status.

A defence that lacks any kind of real security. John Stones is a good player but a naïve defender. Gary Cahill is coming off the back of a poor season. England aren’t great at the back, and that could hurt them when they face someone of immense class – like Belgium.

Marcus Rashford seems to play with an abandon that isn’t possible at Old Trafford; expect the Manchester United man to continue his fairytale career explosion.