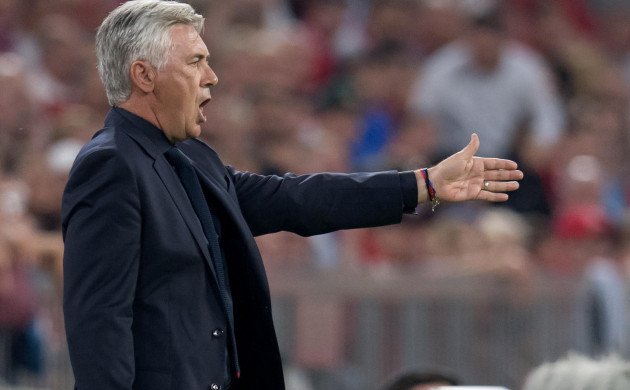 Will Carlo Ancelotti be Italy's next manager?

The deadline the FIGC gave for the announcement of the new Italy manager is fast approaching. Billy Costacurta, one of commissioner Roberto Fabbricini’s deputies, promised Giampiero Ventura’s permanent successor would be in place by May 20.

His former teammate and manager, Carlo Ancelotti, has always been the frontrunner. The last elected FIGC president, Carlo Tavecchio wanted him in situ immediately after Sweden qualified for this summer’s World Cup at Italy’s expense.

Ancelotti is the most successful Italian manager still active at elite level. His credentials speak for themselves but he did not appear convinced by Tavecchio and his administration. Accepting the offer would have helped Tavecchio save his own job when his position had become untenable. Not that it should ever have been tenable in the first place.

News that Costacurta and Ancelotti met in Rome this week has led to renewed talk of the serial Champions League winner moving into international management. The FIGC confirmed a meeting had taken place, although Costacurta downplayed the encounter as entirely casual. He made it sound as if he just happened to bump into Ancelotti. You know how it works.

Carlo was in Rome for work and, of all the hotels in the Eternal City, he so happened to choose the one Billy has made his residence since accepting the role of vice-commissioner with the FIGC. The stars must have aligned. Fabbricini was keen to point out Ancelotti asked Costacurta for coffee, not the other way round.

On the surface, the time seems right for Ancelotti. After all, what is there left for him to accomplish in the club game? He has managed the most prestigious teams in the world, winning the league in four of Europe’s top five leagues. The only title to get away from him was La Liga. Not that Real Madrid and their supporters hold that against Ancelotti. Not after he ended their wait for la Decima in Lisbon, which was satisfactory enough on its own without it coming against rivals Atleti.

The first of Ancelotti’s three books goes by the title ‘I Prefer the Cup’ a play on words with Coppa - the dry cured pork he loves. Isn't it time to start thinking about adding the Henri Delaunay trophy to his collection or the World Cup in 2022? You can picture Ancelotti as an Italian Del Bosque. The question is: does he see himself in that role?

Ever since the job became vacant Ancelotti has expressed his pride at being considered for the position. His coaching career started within the FIGC as part of Arrigo Sacchi’s staff. At the same time Ancelotti has made it clear he would like to remain in the club game. Arsenal are looking for a new manager. Chelsea are expected to. But that’s it and neither are likely to be in the Champions League next year.

Perhaps this explains why Ancelotti has agreed to meet the FIGC again. Maybe it also acknowledges his place in pecking order on Arsenal’s shortlist. The FIGC have a couple of issues when it comes to making their pitch. The first is convincing him there is a serious, meaningful project in the pipeline. The other is the expense of appointing him and his staff.

As was the case with Antonio Conte, it might be necessary for Fabbricini and Costacurta to persuade a sponsor to subsidise his wages. Reviewing the shortlist of candidates, which includes Roberto Mancini and Conte, this is going to be a recurring problem. The FIGC has expensive taste. But it’s worth bearing in mind a big name would attract more sponsorship revenue and help pay for themselves.

Ancelotti is still under contract with Bayern until July, although Fabbricini claims all ties will be severed once they go out of the Champions League, which will happen on Tuesday unless they overturn the 2-1 defeat suffered at the hands of Real Madrid in Munich this week. The sense is it is less messy than extricating Conte from Chelsea and Mancini from Zenit.

The FIGC say they’ll meet again with Ancelotti. After all, how much talking can you do over a quick espresso? You get the impression the ball is in Carlo’s court. “I told him Marcello Lippi and Cesare Prandelli did not earn what they could earn at club level. But the Italy job has a value that goes far beyond money.”

At 58, it’s hard to escape the feeling the moment has come for Ancelotti to take it. In the past he joked that any time before 2030 is too soon.

But is the right time not now, Carlo?