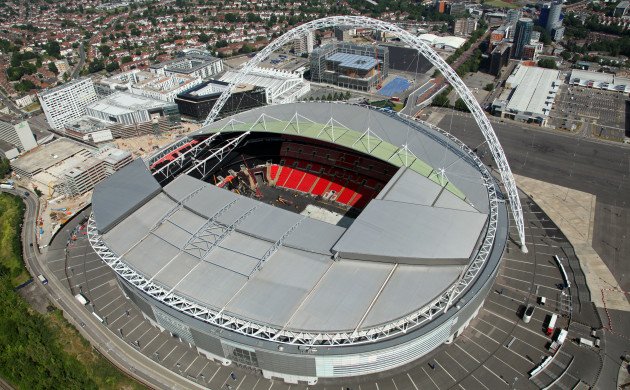 Manchester United fans travelled down to Wembley on Saturday to watch their team beat Tottenham Hotspur in the FA Cup semi-final. Gone are the days when a simpler and cheaper journey to Villa Park, Maine Road or Goodison Park is an option, since the FA turned the national stadium in to the home for semi-finals in 2008.

Aside from being more inconvenient, travelling to London adds a fair chunk of money to what is already an expensive day out when factoring in train tickets at least £85 return from Manchester.

Still, the supporters had a great trip to Wembley, filling the Green Man pub hours before kick-off with as many drinks, songs and flares as anyone could want.

After going a goal behind, United equalised before half-time through man of the match Alexis Sanchez, before Ander Herrera scored the winner in the second half, grabbing the club badge as he wheeled away in celebration.

The following day Chelsea confirmed themselves as United’s opponents in the final, before the FA announced ticket prices.

It’s hard to understand why the FA believe such an extraordinary price hike is justified. How can they think match-going fans deserve to get fleeced like this just so they can watch their team compete for a trophy?

Supporters are left with the choice of being totally ripped off or missing out on being at the final. The saddest situation of all is those who don’t have a choice and simply cannot afford to pay the prices the FA have set.

We can all understand this is a case of supply and demand. If the loyal supporters, who have been following their team all season -- and for seasons before - cannot pay what the FA ask, then someone else will.

Club supporters are given just 63% of the total capacity of Wembley, 28,000 tickets each, and have to pay an arm and a leg to claim one of them.

United supporters must have forked out for a season ticket and bought tickets for every cup game just to be in with a chance of going to the final. Now they have to pay hundreds for their ticket and transport to return to the capital to cheer on their team against Chelsea.

In the matchday programme on Saturday, the FA bragged about what global draw this competition was, saying: “for the FA, as a not-for-profit organisation, this success is vital to our ability to reinvest into the grassroots game across the country.”

Maybe the FA think we have forgotten they will eventually have to pay close to £1 billion for the rebuilding of Wembley, with the construction a disaster from start to finish. The new national stadium was supposed to be ready in 2003 but didn’t open until 2007.

They had to take out a loan to pay for the rebuilding and have been paying huge interest on it. They refinanced the loan in 2015 and have revealed it won’t be paid off until 2024.

In 2017 it was announced the FA are losing £15m a year as 5,000 VIP seats at Wembley are scrapped due to fall in demand. Club Wembley has now been reduced to 10,000 hospitality seats after the initial 10-year packages have expired with nowhere near as much uptake as when the stadium opened in 2007, which has seen a decline in revenue.

While paying back their loan, the FA have committed to reinvesting £180m back in to the game every year. While many fans will welcome this plan, that doesn’t mean they are happy to be paying huge sums to watch their team play in semi-finals and finals to boost the FA’s income.

The FA are less concerned about who is filling the seats for the cup finals, though, more than they are getting a top price from whoever can afford to pay it.

Football has been changing for a few decades, with ticket price rises common, but United fans have seen this level out recently after the initial extortionate costs dished out by the Glazer family. Their season ticket prices have been frozen for the last nine years.

Will the fans boycott? Will the clubs put pressure on the FA? Both scenarios are unlikely, as the acceptance of being fleeced and a lack of influence to bring about change has infected the game. Petitions are being signed but will this make any difference?

The FA should be ashamed, but the truth is they’re laughing all the way to the bank. It’s just the latest show of contempt and disrespect that this country’s Football Association has for match-going fans.