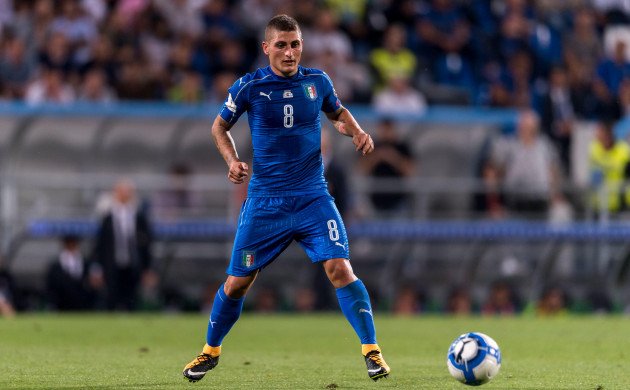 Italy didn’t miss Marco Verratti at Euro 2016 and they won’t bemoan his absence on Monday in the second leg of their World Cup play-off against Sweden. It feels odd to write that but it’s a fair reflection of how his international career is considered in Italy.

Verratti let Italy down in Stockholm, needlessly getting himself booked 80 metres from goal in the first half. It rules him out of the game at San Siro, when the Azzurri need a hero if they are to qualify for Russia next summer. Made one of the scapegoats for the defeat, the frustration with him boiled over because this issue goes beyond one game.

Verratti has made 38 appearances for Italy. Not one has been memorable. He is renowned as one of the best playmakers in the world. Barcelona wanted him in the summer because Xavi and Andres Iniesta believe he is one of the few players who can make Barca be Barca again. His performance against them at the Parc des Princes last season was extraordinary and it wasn’t the first he has produced in the Champions League knockout stage. Ask Chelsea fans.

Italy are still waiting to see this Verratti. It’s as if there are two. One for his club. The other for his country. A Jekyll and Hyde. La Repubblica’s Maurizio Crosetti concluded he is “overrated. His principal talent picking up yellow cards."

Crosetti wasn’t the only one. "Many of our supposed world-class players are just that; supposed. Verratti first and foremost,” Luigi Garlando wrote in La Gazzetta dello Sport. “He earns like a Pharaoh. Sacks agents. Feels persecuted by referees. Meanwhile at 25 he is still yet to play a good game in blue.”

Where does the blame lie? Are they right in thinking Verratti is not all that? Undeserving of his status in the game? The criticism seems overblown. It’s hard to think any of Europe’s top sides would pass up the chance to sign Verratti if given the opportunity.

For years what counted against him with Italy was his place in the hierarchy. It was either Verratti or Andrea Pirlo. Not both. Although Cesare Prandelli dared to play them together towards the end of his reign. Pirlo’s decision to carry on for another year after the World Cup in Brazil also got in the way of his progress.

“It means I will play either on the left or right side of the bench,” Verratti joked. Even when Pirlo’s international career effectively ended with his move to MLS, Antonio Conte preferred Daniele De Rossi and Claudio Marchisio to him. Leonardo Bonucci’s desire to be Pirlo also created and still creates a dynamic different to the one he enjoys at PSG.

You also wonder if leaving Italy early and never playing in Serie A counted against him. He didn’t have the on-field understanding or the trust of some of his teammates that comes with playing regularly together. Injuries have played their part, but with the exception of Prandelli, Verratti has never played under a manager at international level who has made an effort to play to his strengths. Conte asked that he perform a different role to the one he does for PSG.

“Conte’s midfielders (with the exception of Pirlo) always play without the ball,” Verratti explained. “It would be like making us play full-back (a completely different position). I’d do it with all my heart, but…” He’s a fish out of water. The situation hasn’t changed under Giampiero Ventura.

Friday’s game was the perfect illustration of the problem. Verratti didn’t touch the ball for the first five minutes. Italy resorted to long balls, which meant they bypassed midfield. It’s enough to look at the numbers. Giorgio Chiellini (125) registered twice as many passes as Verratti (57) whose position high and wide where he combined with Matteo Darmian was far from his comfort zone.

You would never have guessed Italy outnumbered Sweden 3v2 in midfield. Verratti couldn’t influence the game but his manager didn’t put him in a position where you could reasonably expect him to. The absence of any structure impacted negatively on him and the rest of the team.

For now he has to cross his fingers and hope Italy can turn it around on Monday. If they don’t, Ventura will lose his job and you’d imagine Carlo Ancelotti would be among the favourites to replace him. Maybe only then we’ll get to see the real Verratti play for Italy.