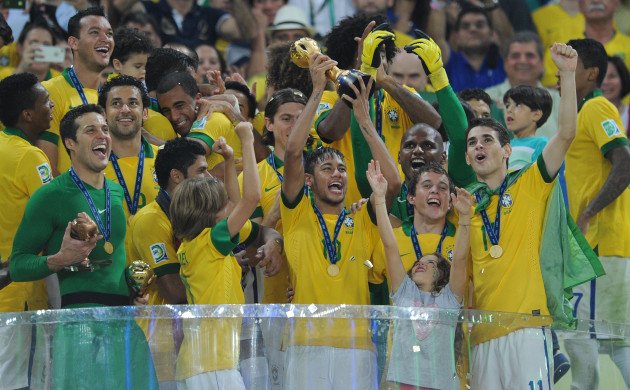 The history of the Confederations Cup

The 10th edition of the Confederations Cup kicks-off on Saturday, with host nation Russia taking on Group A opponents New Zealand at the Krestovsky Stadium in Saint Petersburg. Sixteen matches will take place in four different venues over the next couple of weeks, but it will be just as interesting to see how the Russians deal with the organisational aspects of a tournament whose principal purpose is to serve as a warm-up for the following year’s World Cup.

It was, however, not always like this. The first three versions of the competition – which was then known as the King Fahd Cup – all took place in Saudi Arabia, while the first two, in 1992 and 1995, were not held as a prelude to the World Cup. The general idea was still to pit continental champions against one another, but it was not until FIFA’s takeover of the tournament in 1997 that it became known as the Confederations Cup and began to resemble the event we know today.

Argentina were the first ever winners, beating Ivory Coast and Saudi Arabia in a four-team contest which also featured the United States in 1992. Two more countries participated three years later, with Denmark defeating the holders by two goals to nil in the final. In 1997, meanwhile, eight sides were involved as Brazil brought the trophy back to South America with a 6-0 thrashing of Australia in Riyadh.

The competition took place on a biennial basis until 2005, before shifting to once every four years – the same schedule which exits today. The 2001 Confederations Cup was held in the same place as the upcoming World Cup for the first time, with Japan and South Korea each hosting eight matches in a combined six stadiums. Reigning world and European champions France got their hands on the prize in East Asia, but they were unable to replicate the feat 12 months later, when they were surprisingly eliminated before the knockout rounds of the World Cup after picking up just a single point from group-stage meetings with Senegal, Uruguay and Denmark.

Germany, South Africa and Brazil were then afforded the opportunity to stage dress rehearsals ahead of the 2006, 2010 and 2014 World Cups. The latter edition in 2013 was somewhat overshadowed by demonstrations from the Brazilian public, who took to the streets to protest against the large sums of public money being spent on the Confederations Cup and, chiefly, the World Cup. The unrest began in response to an increase in bus fares in Sao Paulo, the country’s most populous city, but soon grew into a nationwide display of discontent at the incredibly high costs that come with hosting the two competitions.

Despite the dissent, Brazil managed to add to their 1997, 2005 and 2009 triumphs on home soil four years ago, beating Spain 3-0 in the final; Chile’s victory at the Copa America in 2015 means they are the sole CONMEBOL representatives this time around, though, so the Selecao will not have the chance to win the tournament for the fourth time in a row.

World champions Germany are the bookmakers’ favourites this year, when there is a good chance of a new name appearing on the trophy: Mexico, who emerged victorious on home soil in 1999, are the only previous winners taking part in Russia. The 2015 CONCACAF Cup winners will be attempting to advance from a group which contains the hosts, 2016 OFC Nations Cup victors New Zealand and European champions Portugal, while the Germans have been drawn in Group B alongside Chile, African champions Cameroon and Australia, who won the Asian Cup two years ago.