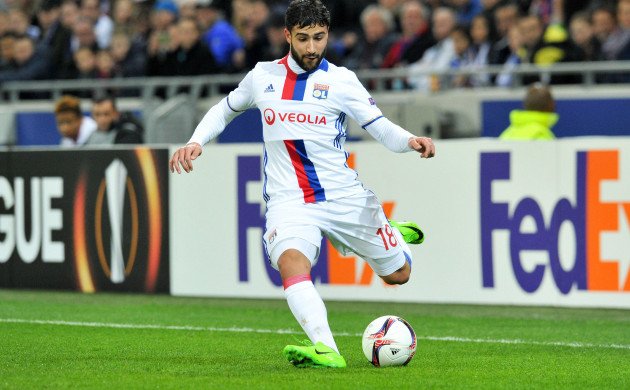 Tactical analysis: How Nabil Fekir has taken his game to another level this season

Nabil Fekir was riding high in September 2015, starring in an exciting and dynamic young Lyon side and becoming an increasingly important figure for France at international level, all at just 22 years of age.

But his progress was soon halted, cut down by a cruciate knee ligament rupture during his first start for Les Bleus. A months-long recovery process ensued, with the young attacker struggling to rediscover the form that had earned him praise from Zinedine Zidane and made him a target for Real Madrid before his injury.

That is, at least, until this season. Since the start of the 2017/18 campaign, Fekir has scored 11 goals and registered four assists in 11 Ligue 1 games, contributing a further goal apiece in the Europa League and the Coupe de France.

The 24-year-old is in the form of his career, surpassing the performances which saw him rise to prominence in the 2014/15 season, when he scored 15 goals in 39 games, and just one shy of equalling his tally for the entirety of last term.

Key to Fekir’s dramatic spike in form this season has been an evolution in his role, both in terms of what is required of him from a technical and tactical point of view, as well as the increased responsibility he has assumed since being made club captain over the summer.

Lyon sold Alexandre Lacazette, Corentin Tolisso and Maxime Gonalons ahead of the 2017/18 season, and brought in the likes of Mariano Diaz, Bertrand Traore and Kenny Tete. It was a summer of change and Fekir, the side’s remaining star, was relied upon to be the constant, Lyon’s leader through a period of transition.

Those changes of personnel have also greatly affected his on-field role. During his previous peak two seasons ago, Fekir thrived as a secondary striker behind Lacazette, while he also often featuring on the right wing, cutting inside on to his stronger left foot.

This year, with ex-Real Madrid man Diaz as the team’s No.9, playing on the shoulder of the opposition defences and less adept at linking play than Lacazette had been, Fekir has been acting as a more conventional No.10. Heh drops deeper to conduct play and is often seen in midfield zones at the start of moves, while also providing a cutting edge in the final third.

This is evidenced by the fact that he is making more passes per 90 minutes this season (40.3, up from 37.6 the year before), with the difference coming in the amount of short passes he is completing (from 30.1 to 33.3).

As we see in the above image, taken from a recent Ligue 1 game against Saint-Etienne, in which he scored twice against Lyon’s bitter rivals, Fekir is seen dropping into his own half to get on the ball and string passes together, exchanging with the midfield.

He then follows behind the play, pushing Lyon upfield and keeping himself available as a simple passing option, again exchanging short passes with the Lyon midfield.

Fekir’s roaming into deeper positions can be attributed, in part, to Tolisso’s departure. The 23-year-old France international joined Bayern Munich in the summer, robbing Lyon of their star box-to-box midfielder. Without Tolisso as the driving force in midfield, Fekir has taken a more active role in how his side builds from deep.

At present, with a greater emphasis placed on his ability to muster goals for himself, Fekir’s key passes-per-90 average has fallen slightly compared to last season, at 2.2 from 2.6. However, his ability to conjure chances for others is still a crucial feature of Lyon’s play, with no team-mate with more than 300 minutes of Ligue 1 action to their name able to match his key passes return.

The image above, from Lyon’s 2-1 win away at Rennes in August, shows how Fekir is able to pick up pockets of space in and around the opposition’s penalty area. His quick thinking, vision and precise execution allows him to thread a ball through to Traore, creating a scoring chance.

Much of what has set Fekir apart this term has been his individual brilliance: the 24-year-old is able to do things that most players in Ligue 1 cannot, and his current confidence level means he's producing moments of magic with surprising regularity.

Above, Fekir picks the ball up in midfield and immediately looks drive at the Saint-Etienne defence, forcing Les Verts’ backline to retreat and utilising his unmistakable scurrying dribbling technique that has drawn comparisons to Barcelona superstar Lionel Messi.

As he approaches the edge of the penalty area, Fekir shifts the ball on to his left foot before rifling an unstoppable strike into the bottom corner. This is the kind of goal that exemplifies his shining form so far this season: he's so confident in his ability right now that he doesn’t think twice about carrying the ball over 40 yards and scoring from range.

Bruno Genesio’s side cannot be characterised as a one-man band: they have a swathe of gifted young players on the verge of becoming bona fide stars of the European game. But Fekir is unquestionably their main man, the player who offers consistency and who ties everything together for Lyon.

The way things are going, though, Fekir may not be a Lyon player for much longer. If his current level of performance is maintained throughout the season, and if he impresses at next summer’s World Cup in Russia, Europe’s elite will be clambering over each other to lodge big-money offers for the gifted No.10.

Although the possibility of a January move has been ruled out, Real Madrid and Arsenal are already thought to be monitoring Fekir’s progress ahead of next summer. And the man himself has spoken openly of his aspirations to test himself in either La Liga or the Premier League.

“There is nothing that tempts you more than that... Spain and England,” he told Le Parisien after the win over Saint-Etienne recently.

"Those are the two most attractive leagues, where they love football. From a technical point of view, it is neat. It is the best.”