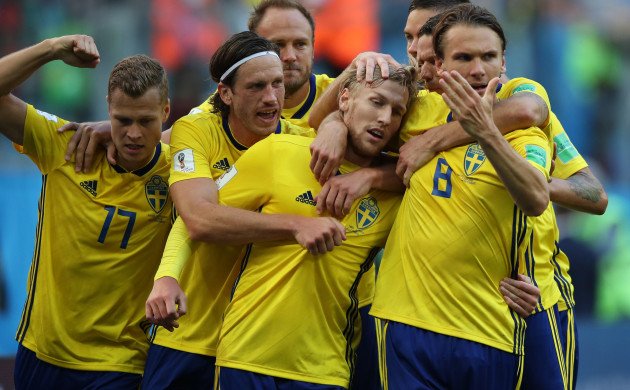 Pockets of white shirts caught the eye at the Krestovsky Stadium on Tuesday. Marked out as German supporters by their Mannshaft replicas, they had bought tickets expecting to see the world champions in the second round. Germany would have played here as group winners. Instead they were out of the competition altogether and the sizeable German presence served as another indicator of the surprise at the fate which a nation befell.

Playing in Germany's place were the consistently underestimated Sweden. Janne Andersson's side won the group on the final day. Pre-tournament power rankings had them only as good as a third behind Jogi Löw's Teutonic contenders and Mexico. But the Swedes are making a habit of out-performing expectation. Along with hosts Russia, who knocked out Spain, they have contributed to making this World Cup feel as open as any in recent memory.

Bizarrely enough, in Italy this has fostered some regret. "Aside from Brazil I don't see anyone superior to us," Roberto Mancini said. Not France, Roberto? Didn't they wipe the floor with Italy in the warm-ups? And what of Sweden? Did they not qualify at the Azzurri's expense back in November? Are they not also a big part of why the Netherlands are watching the World Cup on the sofa?

The absence of a superstar in Zlatan Ibrahimovic, not to mention a style of play that makes Janne Andersson's side exciting to watch or interesting to study, helps perpetuate this disregard. On Tuesday, the German fans at Krestovsky watched Sweden upset the odds again, knocking out Switzerland, a team ranked sixth in the world, in circumstances reminiscent of their victory against Italy in Solna: another game decided by a single goal, deflected in off an unfortunate opponent (Manuel Akanji and Daniele De Rossi).

"Everyone says they're a mediocre team but they found a way to eliminate Italy and Germany," Switzerland manager Vladimir Petkovic huffed. "They are not mediocre, they are strong and their fitness is extraordinary. When they score first, they become a very difficult opponent to come back against."

Historically encounters with Sweden have left England dealing with the same questions of major tournament mortality as Ingmar Bergman tackled in his films. The Swedes have seldom been easy to get the better of and it's worth remembering that their last appearance in a World Cup semi-final (1994) is more recent than England's at Italia '90.

While it's hard not to catch the 'It's coming home' euphoria surrounding Gareth Southgate's team particularly after England overcame their penalty shootout hoodoo against Colombia, you wonder what it all must look like to other countries. Judging by an article surveying Swedish opinion in the Guardian, it seems they look upon the attitude, which is more espoused by the fans and tabloid press than the team itself as arrogant, entitled and hubristic.

Not that the Swedes mind of course. They are fine with being underrated. This team clearly thrives off it. Colombia will also have furnished Andersson with ideas of how Sweden can frustrate England. This was lost amid all the attention on head-butts, penalty spot scuffing and other antics that gave the game the feel of a Copa Libertadores final.

Shorn of James Rodriguez, Colombia offered little going forward until Carlos Bacca's introduction late on. Their first shot on target wasn't until the 80th minute. But it's also true that the only way England looked like scoring was from a set-piece. Juan Quintero took Jordan Henderson out of the game, following him everywhere except the bathroom. Which meant England's back three shouldered all of the responsibility for their build-up play. Colombia's full-backs marked Kieran Trippier and Ashley Young. Jefferson Lerma and Carlos Sanchez stayed tight to Dele All and Jesse Lingard while Wilmar Barrios dropped in to help Colombia's centre-backs out-number Harry Kane and Raheem Sterling. For all the control England enjoyed, creating anything clear cut was difficult.

As dangerous as Southgate's side are from set-pieces, defending them is also proving something of an Achilles' Heel. Yerry Mina equalised from a corner in stoppage time on Tuesday. Felipe Baloy slid in to get Panama a consolation goal from a free-kick in England's second game. And his teammate Ramon Torres should have scored from a similar situation only moments beforehand.

All of these things are easily replicable for Sweden. Just as Jose Pekerman adjusted Colombia's formation from 4-4-2 to 4-2-3-1 to stifle the diamond England use in their build-up, so too can Andersson. Although preferable to pre-tournament forecasts anticipating a quarter-final with either Germany or Brazil, this is by no means a foregone conclusion for England. Over the last two years Sweden have become specialists in shocks. And on Saturday in Samara they'll be hoping the trend goes uninterrupted.