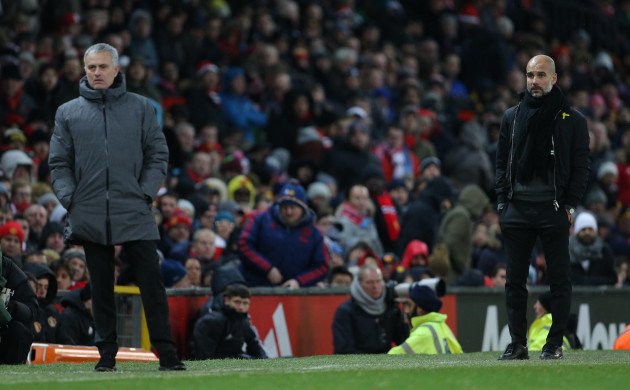 Since they arrived in Manchester, Mourinho has done more for youth development than Guardiola

Manchester United progressed to the quarter-finals of the FA Cup on Saturday afternoon after beating Huddersfield 2-0.

Jose Mourinho had seen his team beaten at the John Smith’s Stadium earlier in the season, yet he still opted to rotate his squad and bring in players who have had limited playing time this season. The gamble paid off, with Romelu Lukaku linking up well with Alexis Sanchez and Juan Mata to give United the goals they needed.

Scott McTominay, who was given his United debut against Arsenal last season, was handed another 90 minutes by Mourinho, taking his appearances this campaign to 15. Along with Jesse Lingard, Joel Pereira, Angel Gomes and Ethan Hamilton on the bench, United’s record of including an academy graduate in every single matchday squad continues into its 81st year.

Mourinho had changed his formation to 4-3-3 in a bid to bring out the best in Paul Pogba, with talk in the media suggesting there was a rift between the player and manager. Pogba pulled out of the game with illness on the morning of the game, though, leaving United a player short.

The 19-year-old Hamilton was the man to get the call, despite having played 90 minutes for the U-23s the evening before. Hamilton, originally from the same local boys club in Edinburgh as Darren Fletcher, has yet to make his first-team debut and was delighted to be included. He took to social media after the game, writing: “Amazing experience travelling with the first team and being on the bench today!!”

It’s hard not to draw comparisons with Pep Guardiola’s treatment of youth since his appointment as Manchester City manager. The man who was supposed to be passionate about youth development has more or less forgotten about City’s academy, with their players having racked up less than 45 minutes of playing time in the Premier League this season. When you consider they’ve had the title wrapped up for months, it’s odd that Guardiola has been so opposed to giving youngsters a go.

In City’s recent draw against Burnley, Guardiola opted to leave a space on the bench empty, naming six substitutes instead of seven. Given City have outspent every club in the league for four of the last five seasons, it’s unsurprising that this move courted little sympathy.

Gary Neville, a product of United’s academy, voiced his disappointment over Guardiola’s decision at the time.

"I think it's a joke, I absolutely think it's a joke," he said. "Forget the second team. Even if they played yesterday, bring one and put them on the bench. Bring a kid to travel with the team, help the kit man and put him on the bench to have the experience of being in a Premier League game. Give someone a boost at the club. If you're the academy or reserve team manager at Manchester City you must think 'I'm wasting my time'.”

Guardiola was defensive after the game, pointing out that the reserves had played the evening before, but this did little to explain why he couldn’t have given some matchday experience to one of the younger players. A manager can only make three substitutions, but the reward, excitement and determination the inclusion would have provided an academy player was lost. Guardiola was more concerned with sending a message.

That’s why when Leroy Sane picked up an injury in January, Guardiola preferred to submit a bid for Riyad Mahrez than promote any of City’s young players.

Mourinho jokingly referred to himself as the “monster that kills little kids” last month. He is supposed to be a manager who does nothing for youth development, while it was apparently one of Guardiola’s core principles. Yet Mourinho put Hamilton on the bench, despite him playing the evening before, while Guardiola used a similar situation as an excuse not to fill a squad place with a youngster.

The United manager’s team selection on Saturday suggests the predictions over what the two managers would do for youth development were premature and inaccurate.