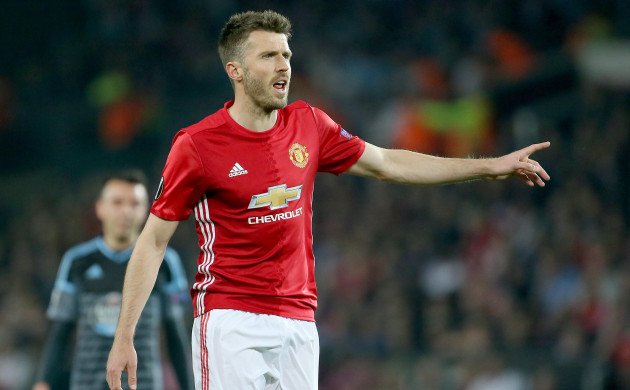 Manchester United fans have the chance to say goodbye to Michael Carrick, a key part of their recent success

After health concerns which have seen Michael Carrick’s playing time limited this season, Jose Mourinho has confirmed that the club captain will start Manchester United’s final Premier League game of the season against Watford.

The midfielder was given a testimonial last summer, but Sunday’s game will be a chance for the Old Trafford crowd to thank Carrick for his contribution to United’s success and say goodbye to him as a player.

After 12 seasons at the club, it’s sad that his last campaign has played out the way that it has. Carrick has made just four appearances after it was revealed that he was suffering from an irregular heart rhythm. Back in November he underwent a cardiac ablation to correct the problem and started training with the first team again.

However, having still not played a game by January, Mourinho announced that he had asked Carrick to join the coaching staff from next season.

A few weeks later, Carrick made his first appearance since his health problems in the FA Cup game against Yeovil, then as a substitute against Newcastle, before his most recent appearance against Huddersfield in February.

Despite being away from the pitch, he’s been making his mark off it, with reports suggesting he’s impressed those behind the scenes with the astute advice he’s given to his teammates.

The most notable example was his performance at half-time during United’s recent win over rivals Manchester City at the Etihad. Mourinho’s team were 2-0 down and a win for City confirmed them as champions. This would be a moment in the history books that United supporters would never be able to forget.

Carrick reportedly gave a rousing speech and spoke to individuals about what they needed to do differently. After the break, Paul Pogba scored twice to level the score, before Chris Smalling scored a winner. While City went on to win the title as expected, United were spared the humiliation of watching them do it with a victory over them.

“Every time after training or every time after a game, he talks to me he comes and he says do it this way,” Pogba revealed. “He says 'You can kill, you can kill', because nobody can stop you. It’s hard to make this run when you play in a two because you have to stay, when we have three I can go forward.”

When it comes to personality, there’s not much that Carrick shares with Pogba, although he did dab when scoring in his testimonial game last summer. But in terms of their role in the team, Pogba would do well to play his part in as much success as Carrick did with the club.

After Sir Alex Ferguson signed him in the summer of 2006, United went on to win the Premier League three years in a row and play in two Champions League finals, winning one of them. "The feeling that gave us was the best I've ever had in my life," Carrick reflected on that European Cup win over Chelsea in 2008 in an interview with ESPN.

With the club seemingly crumbling at times in the years following Ferguson’s retirement, Carrick has remained as one of the most trusted and reliable players. It is natural that he takes on a coaching role given he’s been advising the younger players for some time.

"I think as an older player, there's a kind of natural responsibility or natural role to go around the lads and say a few things," he said this week. "I had it when I came into the team; when you look to the older boys in certain situations to see what they say, see how they act, and see what they expect.”

Carrick hasn’t been universally loved by United fans during his time at the club, but it’s hard to argue with his contribution to arguably the greatest period in United’s history. He’ll leave the club with 464 appearances to his name, which is more than Bryan Robson, Denis Law or Steve Bruce.

While Sunday will be the last time United fans see him in a United shirt, they’ll see him on the bench for some time to come. So here’s hoping he manages to make as much of an impact from the sidelines as he did on the pitch.