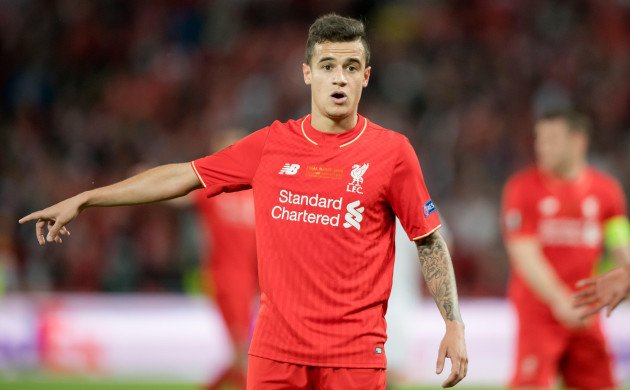 There are the likes of Lionel Messi, Alexis Sanchez and Neymar – those I have been lucky enough to watch bloom into global stars, knowing from the very start that they had the potential to do so.

And then there are those who slipped by, players who I saw early in their careers and never would have believed that they would go on to become such important figures in the game. An example of someone in the second category is Philippe Coutinho, who recently became the highest scoring Brazilian in the history of the Premier League.

This one grew up right under my nose. I was on the scene, and watched a fair few of his first steps as a senior player. There was always hype around him, but I could not really see how it was justified. My mistake.

Coutinho is from my adopted city of Rio de Janeiro – he was born just two years before I moved over here. He came through the ranks with Vasco da Gama and, in July 2008, just turned 16 and without having made his senior debut, was signed by Italian giants Inter. They would have to wait until he was 18 to take him across the Atlantic, and so he ended up spending a year in and around the Vasco first team.

It may have been to his benefit that when he first got his chance it was in a winning team. Vasco were relegated in 2008, and spent the following year winning back their traditional place in the Brazilian first division. At the start of 2010 he was well on the way to becoming an established starter in the first team, typically operating off the main striker in an attacking trident.

I had seen him a few times at this point, usually in big Rio derbies at the Maracana stadium. When I look back at my notes, I see the same comment over and again: “lacks a left foot.” My impression of the player at that time was that, while talented, he was too lightweight and not quite quick enough to tip the balance at the highest level. If I close my eyes I carry a mental picture of the teenage Coutinho carrying the ball innocuously sideways, running down blind alleys.

I was not unduly surprised, then, when he struggled to make much of an impact after moving to Italy in the middle of 2010. There was a brief loan spell at Espanyol, where he weighed in with a few goals. But in January 2013, when Inter were happy to let him move to Liverpool, I assumed that my original judgement had been confirmed. The Italian giants appeared to have reached the conclusion that their long-term investment in Coutinho had not been a success.

The evidence at national team level did not work in his favour either. Back in 2009 he had travelled to Nigeria with a much-hyped Brazil side to contest the Under-17 World Cup. The outcome was catastrophic. A bizarre last-gasp goalkeeping error gave the team a win over Japan in the opening game, but they then lost 1-0 to both Mexico and Switzerland and, amazingly, became one of just eight teams not to make the knockout stage. The team’s attack was led by Coutinho and Neymar, already making a name for himself in the first team at Santos. Nearly eight years later, it stands as an even more astonishing failure than it seemed at the time.

There was a much happier ending in 2011, though, when Brazil won the World Under-20 title in Colombia. But Coutinho was by no means the outstanding performer. This was Oscar’s triumph, and voted as player of the tournament was centre-forward Henrique, who has hardly set the planet on fire since. In the final against Portugal, Coutinho was substituted as soon as Brazil went 2-1 down on the hour-mark. Was this really the same player who, in a few years’ time, would become an important part of a team which put together eight consecutive wins in World Cup qualification?

Even after his move to Liverpool, there was no immediate change of fortune for Brazil. Coutinho was brought into the squad after the 2014 World Cup disaster, but had little chance of ousting Neymar and claiming the left-wing position. Neymar obliged by picking up a suspension during the 2015 Copa America, and then sitting out the following year’s Copa Centenario in the USA. Opportunity knocked for Coutinho, but he could not take advantage. He put in a succession of timid performances as Brazil were knocked out in the quarter-finals of the first competition, and eliminated in the group phase of the second. Perhaps he was not so good after all. Maybe his early success at Liverpool had been the consequence of playing alongside Luis Suarez.

And then Tite took over as national team coach. He talked to Jurgen Klopp about how to get the best out of Coutinho, and found a place for him in the starting line-up. If the presence of Neymar meant Coutinho could not cut in from wide left, then he could float across from the other flank. With the team more compact the pitch could still be covered, with Daniel Alves at right back providing width, and there would be plenty of options infield with whom Coutinho could combine.

The results have been outstanding. Coutinho has scored three times in Brazil’s eight straight wins – two of them glorious, game-changing opening goals, and the intelligence of his movement and the angles of his passing have been a joy to watch. Meanwhile, in terms of goalscoring at least, he is enjoying the best season of his club career with Liverpool.

He is more than living up to the hype that surrounded him almost a decade ago. I just wish that I had some early memories of watching him that I could boast about.