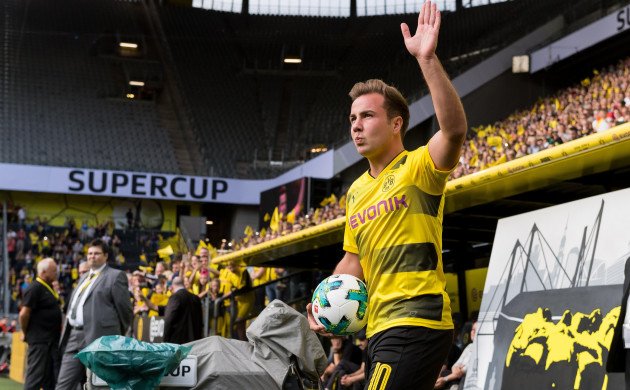 Götze ready to shine as Borussia Dortmund's No.10 - just like the old days

On the morning of Borussia Dortmund’s opening Bundesliga clash of the season, Mario Götze took to social media to plug a 30-second video entitled “Never lose your motivation”, alongside a emoji of a bicep.

It featured all the usual nonsense that seems to come with these football videos: random clips edited together, a thick Instagram-like filter and some awful techno music taken straight from the dance floor of a Greek island.

Yet perhaps we should be willing to let this specific player away with it. Following a rather dismal time at Bayern Munich, Götze swallowed his pride and returned to Dortmund last summer, only to be sidelined midway through the season with a metabolic disease that kept him out of the first team for the remainder of the campaign.

His return against Wolfsburg on Saturday brought with it some much-needed redemption for the 25-year-old attacking midfielder. After bumbling around in the No.10 role, Götze suddenly came to life shortly after the 20-minute mark, setting up Christian Pulisic for the opening goal.

Although fans will remember the American's exquisite finish more than the pass, it was a discrete suggestion that there may be more to come from Götze this season. And Dortmund could certainly use it.

Peter Bosz’s side looks well stocked for this coming Bundesliga and Champions League campaign, but there’s no doubt there's a hole in the side which Götze, if fully fit and on form, would fill perfectly.

Despite the quality of Pierre-Emerick Aubemayang up front and the likes of Marco Reus, Christian Pulisic, Ousmane Dembele and others on the wing, the No.10 position is rather bare. The closest thing Dortmund had to a central attacking player last term was Gonzalo Castro or Shinji Kagawa.

Castro, often employed as a central midfielder with the task of working the ball into attacking positions, was a consistent performer under previous coach Thomas Tuchel, but he was never a playmaker. With just three goals and seven assists in 28 league games last season, it’s clear Castro is no No.10.

However, Kagawa certainly is. The Japan international made his name by replacing Götze’s playmaking and goalscoring behind the striker when the latter moved to Bayern in 2013.

Yet that was some time ago. Now, the 28-year-old is far more inclined to shine in notable bursts from one month to the next. Last season he registered six goals and three assists while playing behind the strikers or on the left, but injuries and inconsistency continue to undermine any suggestion that he’s still the player he once was.

Of course, Götze is in the same boat as Kagawa with regards to digging up old form, but at 25 he has plenty of time on his side to rekindle what made him so special at Dortmund in the first place.

A starting role on the opening day suggests his new coach has faith in him, knowing full well that the attacking midfielder can make a huge difference to Dortmund's season if he's able post similar goal and assist numbers to the ones from his first spell at Signal Iduna Park.

Indeed, if Dembele leaves the club in the coming weeks then BVB can rest assured they have notable cover on both wings. Yet if Götze were to chip in with goals and assists from elsewhere, it would certainly lighten the burden placed upon someone like Pulisic or the recently acquired Maximilian Philipp.

Although these players have the necessary quality, both would cherish a leading figure in the middle of the park who could make scoring goals a great deal easier. It's still not clear whether the old Götze will ever return, but this season may well be perfectly set for him to once again take centre stage at Dortmund.