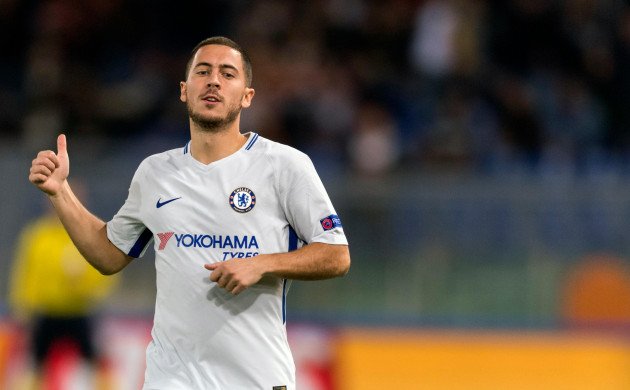 Monday night couldn’t have been much worse for Chelsea. Tiemoue Bakayoko’s red card made the visit to Vicarage Road harder than it ever had to be and Watford’s four goals left them facing humiliation for the second time in a week. The chastening loss to Bournemouth should have prompted a fierce reaction; instead they produced only this. Ten men or otherwise, Chelsea were an insipid mess of apathy.

Briefly there had been hope. From nothing and in the midst of waves of home pressure, Eden Hazard shimmied into a shooting position and scored, brilliantly, from 30 yards. It was typical Hazard, typical of that excellence which he's spent his Premier League career making seem entirely normal.

And yet it was completely futile. Rather than buckling, Watford ran the knife through their visitors in that final 10 minutes, scoring almost at will and running up a score which, on the balance of play, actually didn’t flatter them. This, remember, is a side who have been on a dreadful run of form over the past two months, have sacked a manager and are still adapting to the direction of his successor.

As they had against Bournemouth, Chelsea looked lost. Alvaro Morata’s absence provides some mitigation and the injury to Andreas Christensen has been more destabilising than it was expected to be, but both should be bearable issues given the depth of resources at Stamford Bridge. Elsewhere, the distance between Antonio Conte and his employers has never seemed wider. The Italian has long been assumed to be heading out of the club in the summer and now the distrust between him, Marina Granovskaia and Roman Abramovich seems too thick to ignore. Too thick, also, for the team to play on uninhibited.

The immediate concern is for Conte, who appears headed for dismissal sooner rather than later. More troubling, though, is the future of Hazard. What is his motivation to remain at the club?

In the middle of January, various British media sources reported that the Belgian was intending to sign a contract extension and that his desire to join Real Madrid depended on Zinedine Zidane’s future at the Santiago Bernabeu. Those stories may well be accurate and based on remarks Hazard made in good faith, but with conditions at Chelsea worsening by the week and no indication of what life after Conte may look like, any long-term commitment now would be reckless.

The landscape is also changing. Footballers do not live in a vacuum and it won’t have escaped Hazard’s notice that, just two weeks’ ago, Manchester United committed to paying Alexis Sanchez somewhere close to £500,000 per week - almost twice his current salary. He will also be aware, of course, that Manchester City can not only offer him a better basic wage, but also a far greater platform. If Hazard has serious designs on winning the European Cup or on one day collecting the Ballon d’Or, the current climate dictates that he might need to be at another club to satisfy that ambition.

The problem at Chelsea isn’t just that they currently find themselves in a mess, more that they are at the end of a cycle which will inevitably repeat itself. Just as it always does. The trend in the game now is for systems, structure and order, whereas life at Stamford Bridge continues as it always has done: with Abramovich falling out with his manager, with the head coach posturing to the press, and with team performance succumbing to the resulting acrimony. Chelsea have also lost their financial primacy over recent years, meaning that bouncing between mini-eras is far harder than it once was; whoever replaces Conte will not have the freedom of the market.

If once Chelsea behaved like a true superclub, spending their way out of crisis and never losing their momentum, now their position is slightly more tenuous. We know that Manchester United’s wealth will make them competitive again next year, that Manchester City will be even more formidable, and that the usual suspects will float through to the latter rounds of the Champions League, but the same guarantees don’t exist for Chelsea. Hazard’s advisors will know that.

His personal circumstances are evolving, too. He’s 27 years old, at the peak of his ability, and well positioned to negotiate with almost any club in Europe. In fact, for a player of his talent not to be curious about Spanish, Italian or German football would be hard to justify. He may love Chelsea and his affection for the fans might be sincere, but he does not owe them the best years of his career by default - especially not if he feels, quite reasonably, that he’s already accomplished all that’s available to him.

That’s something to remember. Perhaps it’s also something the club should have been mindful of before allowing this latest episode to lead them towards the brink of another lost season. Conte is on the brink, but Hazard may also be reaching a tipping point.