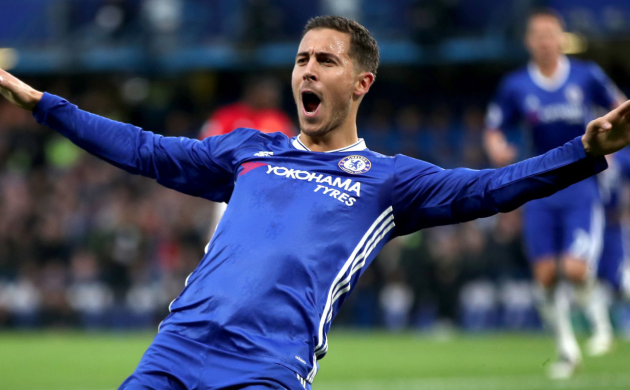 Poor Joel Ward did not stand a chance.

When Eden Hazard was released down the left after four minutes of Chelsea’s clash with Crystal Palace on Saturday afternoon, the first goal of the game looked like a distinct possibility. The Belgium international was forced a little wider than he would have wanted, but after twisting and turning his way past Ward, he picked out the perfect pass to set up Cesc Fabregas for the opener.

It was far from a vintage Chelsea display overall, as the hosts succumbed to their first defeat at Stamford Bridge since September, but they still had ample opportunities to emerge victorious. Hazard was the architect of most of them, buzzing across the final third with intent as he has done for the entire season; the Blues’ lead at the top may have been reduced to seven points following their surprise setback against Palace, but the forward will surely end the campaign as the Premier League champions’ standout performer.

He needed this. 2014/15 did not go at all well for Hazard, with doubts raised about both his commitment to the cause and ability to shine in adversity. He was particularly below-par in the first half of the season under Jose Mourinho and, although he was far from alone in that regard, Hazard’s decline from the previous year was more marked than that of any of his colleagues. However long ago the incident may seem now, it is still less than 16 months since his name was booed by supporters inside Stamford Bridge following the sacking of Mourinho. One particular fan went further, brandishing a banner which referred to Hazard, Diego Costa and Fabregas as “the three rats”, and at that point a summer sale seemed like a genuine possibility.

Time is a healer, though, and Hazard has gradually worked his way back into the good books of Chelsea followers with several stunning showings throughout the current campaign. Antonio Conte’s men remain overwhelming favourites to secure what would be their second Premier League title in three years, and Hazard has once again central to his side's success: in 27 top-flight appearances, the former Lille man has scored 11 goals, provided five assists and generally wreaked havoc as an inventive and elusive inside-forward in Conte's impressive 3-4-2-1 formation.

Rather inevitably, then, the last few weeks have seen an increasing number of reports linking the 26-year-old with a move to Real Madrid. It is a story that should worry those of a Chelsea persuasion; after all, in the minds of most players, Madrid and Barcelona are still considered the pinnacle. Cristiano Ronaldo, Gareth Bale and Luis Suarez, arguably the three greatest players English football has seen in the last decade, all outgrew the Premier League and ended up in La Liga, which provides a home to more world-class footballers than any other domestic competition on the planet.

There is a sense, too, that Madrid require a refresh, if not a drastic overhaul. Ronaldo turns 33 next term and has regularly been deployed through the middle rather than on the wing by Zinedine Zidane, thus potentially freeing up a spot for a new arrival on the left. There have, moreover, been no major acquisitions at the Santiago Bernabeu since James Rodriguez was lured from Monaco in 2014, and a club which has always been defined by its superstar signings – particularly during the presidency of Florentino Perez – may feel the need to reassert itself by splashing the cash when the transfer window reopens this summer.

If that does prove to be the case, Hazard looks like the ideal target. Chelsea will be loath to lose him, particularly as they embark on a return to the Champions League, and the billionaire-backed Blues hardly have a financial need to sanction their star man's departure. Recent history, though, suggests that Real Madrid tend to get what Real Madrid want.