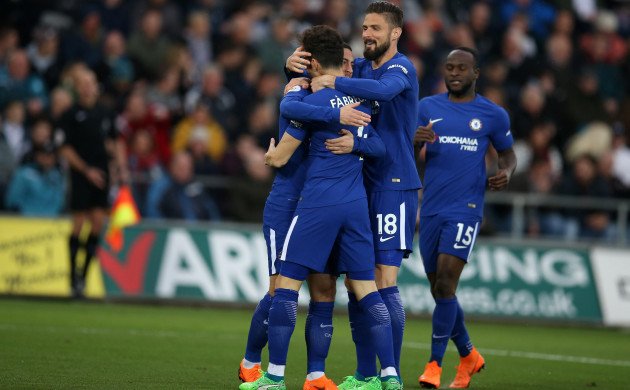 There was no small irony in the way this season’s FA Cup final panned out. An early goal - a penalty even - followed by a stoic defensive strategy with next to no attacking verve ensured the win was straight out of the Jose Mourinho playbook. We’ve seen it so many times, and especially in his latter career during his time at Chelsea and now Manchester United, that another rendition was completely apt.

Only this time he was on the receiving end. Mourinho’s United have made a habit of making the most of few chances and nailing results this season. A 0-0 draw at Liverpool before Christmas saw United barely create a thing, while late-season victories over Man City and Liverpool saw the team score from half of their total shots, neither of which exceeded a handful. This is the kind of good luck that is great to have but can’t be relied on to recur.

Chelsea had only a quarter of the shots in this game and withstood a mild flood of attacking intent from United, where shot volume exceeded chance quality by some margin. The “early goal and stick” strategy was somewhat reminiscent of Chelsea’s 2016-17 title win under Antonio Conte, a manager equally as pragmatic as his opponent here.

Even then, five of Chelsea’s starters were retained from Mourinho’s final reign at Stamford Bridge, and the combination of the Portuguese's grounding and Conte reiteration has instilled a philosophy of practical strategy at the club. Game management saw out the result here, but it's something that Chelsea have struggled with this season. Conte has often cut a frustrated figure on the touchline. Victory here does a mild job of gilding a disappointing season, but having landed only a fifth-place Premier League finish and failed to qualify for the Champions League, Chelsea have clearly undershot a minimum requirement.

They now look to be at a turning point. It seems unlikely that Conte will see out the summer, and the long-term lack of world-class reinforcements in attacking areas leaves Eden Hazard looking rather lonely as the team’s focal point. Olivier Giroud arriving as a fix to back-up or even start ahead of Alvaro Morata felt like a reactive gamble, and Willian still seems to be stuck in an either/or dance with Hazard. Pedro is 30 years old, while Cesc Fabregas, still a creative force, is 31.

With or without Conte and having spent fortunes on players in more defensive roles, Chelsea’s summer could well be defined by how successfully they reinvigorate a rather stale attack, regardless of who helms them.

For United, losing the FA Cup final prevents Mourinho from reflecting on this season as glorious. For a different manager at a different club, second place in the Premier League and a narrow Cup defeat might be considered close enough to success to leave the questioning for another time. That doesn’t quite work for both Mourinho and Manchester United, a manager and club theoretically brought together with just one aim: to win titles. There is significant evidence to show that David de Gea has been a huge reason why United’s season has peaked as highly as it has, but the components to that influence can be fairly partitioned into two categories, skill and luck. De Gea has the ability to influence the former but neither he nor Mourinho nor his teammates have any influence on the latter, and the team has probably topped out on how much luck it can enjoy in one season in relation to their goalkeeping.

Add in a smaller but not insignificant bounce at the front end of the team and United look like a team primed for negative reversion next season. What this generally means is that ahead of Mourinho’s third season - the one that for him has historically gone awry - he is helming a team highly likely to see decline.

There is nothing to say that the side will fall off entirely, but the direction it's pointing in is clearly “top-four contender” rather than “title challenger”. And that’s not really enough. Employing Mourinho as United manager only works if he fashions a title-contending team and a third season of not quite doing that will not be good enough. The acceptance of his pragmatism as a trade-off against a more positive team style requires success to satisfy the desires of all parties, from boardroom to fan base. It won’t be easy to bridge any gap to Manchester City, but that’s Mourinho’s reality. Can he maintain his role if he fails to do that?

Both United and Chelsea ended this season without hitting their real targets, while the top end of the Premier League looks ever more competitive. How each adapts in the off-season via staff changes or in the transfer market has rarely been more important.