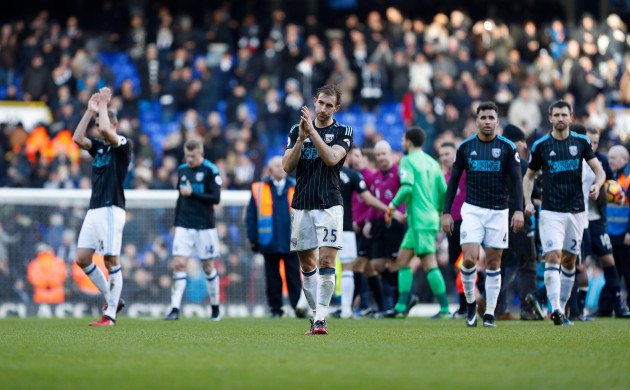 Eventually, clubs like West Brom must be brave to make progress

The question of whether or not West Bromwich Albion were right to terminate Tony Pulis’s contract is complex. Arguments can - and have - been made for and against and, to non-partisan observers, there’s merit in both of them. But none of that matters as much as what happens next.

The native unrest at The Hawthorns was animated less by who Pulis was or the detail of his job performance, and more on what his continued employment seemed to represent. With West Brom wedded to a pragmatic, inflexible style - and sacrificing entertainment in its pursuit - Pulis’s presence in the technical area served as a symbol of his club’s lack of ambition. Once results turned south the conversation began to change, but while they were safe from relegation the ends were always allowed to justified the means.

At the time of writing, the next step remains uncertain. Gary Megson has been placed in temporary charge and a swarm of unemployed British managers are being connected - including Alan Pardew who, according to The Telegraph’s John Percy, enjoys a close relationship with Nick Hammond, West Brom’s technical director, and has been installed as an early favourite for the job.

At this point, it’s appropriate to wonder what the club wishes to achieve. Pardew is not quite as ineffective as he’s commonly portrayed, but his pattern of management is well established: he joins a club, he oversees a quick, short-term improvement, and then his teams slump into a long, incurable decline. Essentially, he’s someone who has to be sacked every 18 months.

Times have changed in English football and West Brom should no longer just be glad to be in the Premier League. They have a bottom-heavy squad, replete with a forest of centre-halves, but are relatively wealthy and certainly more established at this level than at least a third of the other sides.

With that in mind, when - if ever - will the next stage occur? Teams can be forgiven for bouncing between coaches when they’re overmatched in the top-flight and while they’re dependent on intangibles to survive, but eventually that must give way to the pursuit of a proper identity. Or, at least, the intention to find one. If West Brom were to appoint Pardew - or Sam Allardyce, Megson, or almost anyone else being connected with them currently - they would be doing the opposite.

Originally, installing Pulis was easy to rationalise. If he were to provide a couple of years of uninterrupted Premier League football, it was presumably theorised, that would serve as a start point for something bolder. By amassing a certain status and a series of broadcasting payments, the club would then possess the sporting and financial stability to attract a higher calibre of player and, perhaps, a coach whose ambition stretches beyond the 40-point mark.

And, current form aside, that’s happened. West Brom may not have the biggest stadium and might not be located in the most fashionable part of the country, but they still possess a sturdy platform from which to build. Their league position probably has boardroom pulse rates at an elevated rate, but it’s still only November and that in itself is not an excuse to make the least imaginative appointment possible.

This is the problem: for a certain type of club, Pulis-style appointments are presented as a necessary step towards a future which never comes. As this situation seems destined to show once again, when that type of manager loses his hold over a squad, the response is invariably just to replace him with someone who works in a nearly identical way. It amounts to institutional cowardice.

If Pardew were to be appointed tomorrow, he will have departed The Hawthorns by the beginning of the 2019/2020 season. The first team would look slightly different by then and the style of football would have been mildly adapted, but there would be no permanent legacy - no sense that they had moved any closer to a more prosperous future.

It would amount to a points total, a win/loss ratio and very little else. The same bright start, the same stodgy middle, the same hapless end. Pardew, with the greatest respect and like so many of his British contemporaries, is someone who can be sacked one day and forgotten the next. A capable coach, maybe, but someone who has never disturbed the sediment of a club’s identity.

And shouldn’t that be the aim? Recruiting managers will always, like transfer dealings, be an imperfect science and it will forever carry risk and possess the capacity to go wrong, but shouldn’t the intention always be to find something deeper and longer lasting? Not just to pick the first name which comes to mind or the guy with the short, well-established half-life, but someone who can theoretically leave an impression on the fabric of a club.

What if Huddersfield had appointed Steve McClaren rather than David Wagner? If Mick McCarthy had been given the Bournemouth job instead of Eddie Howe? Would Southampton still be in the division if they hadn’t taken a risk on Mauricio Pochettino? Rarely does football reward timidity with progress.