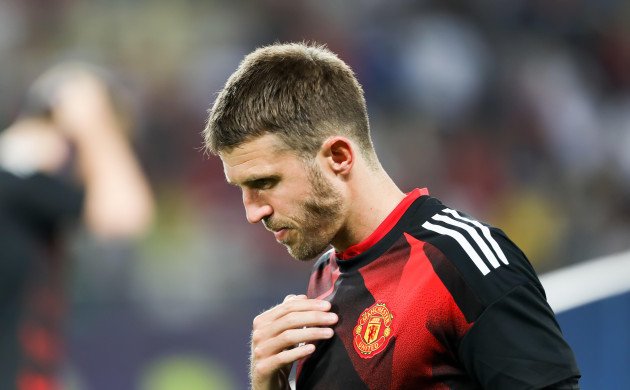 Manchester United’s season had an anti-climatic end after losing the FA Cup final to Chelsea. Despite dominating the chances and possession, United lacked the cutting edge required to break down Antonio Conte’s side and lost out to a silly penalty conceded by Phil Jones.

With Romelu Lukaku unable to start because of an injury, Marcus Rashford was left to lead the line, but he failed to impress in a rare start. While the player must take some responsibly for that, questions were asked over what Jose Mourinho had done to help him develop.

With Anthony Martial, Alexis Sanchez, Juan Mata, Jesse Lingard and Paul Pogba in the squad, scoring goals shouldn’t be a problem for United - but it is.

Something has to change at Old Trafford next season if United are to challenge for the Premier League title and win silverware, but the concern is that Mourinho is too stubborn to change his methods, which some claim are outdated.

Mourinho doesn’t like to take risks. To allow his team to go all-out attack would make them vulnerable to counter-attacks and conceding goals, so he doesn’t like to do it.

Yet at the start of the season, that’s how United played, with fans referring to the team as 4-0 FC given how many goals they scored in the opening games. But when faced with a tough trip to Anfield to face Liverpool, United reverted to type and drew 0-0, losing all the momentum they had built up in the early weeks of the campaign.

There have certainly been some highs since then, including victories over Liverpool, Manchester City, Tottenham, Chelsea and Arsenal, but the brand of football has fallen well short of the expectations set in the first eight games.

However, there may be reason for United fans to feel more hopeful about the season ahead. After it was announced that Rui Faria was leaving his post as assistant manager at the end of the season, Mourinho confirmed he wouldn’t be appointing a replacement.

However, he has made a few new additions to his backroom staff and these could have a positive impact on the way United play - as long as Mourinho is open to new ideas.

Michael Carrick has made the step up from player to coach, a move which has been greeted positively by the fans. Reports claimed he was responsible for United’s incredible comeback at the Etihad earlier in the season, when defeat looked certain with the Red Devils 2-0 down at half-time. Carrick gave a rousing speech and spoke to individual players, including Pogba who scored the two equalising goals.

As a player who spent his best years under the leadership of Sir Alex Ferguson, Carrick certainly has first-hand experience of receiving coaching that allows a team to play with more freedom.

A surprise addition, but one that has excited the fans, is Kieran McKenna making the step up from the U-18s. United’s youth team won their league this season and averaged three goals a game over 22 matches, showing that an attacking approach is certainly no challenge for him. McKenna, a lifelong United fan, is living the dream and will likely have lots of positive ideas about how to take the club forward.

The only issue is whether Mourinho will give them the power to instigate those much-needed changes. The manager has to recognise that his methods aren’t foolproof and it’s hard to know whether a man with the ego the size of Mourinho is capable of doing that.

Still, after a disappointing end to the season, at least United fans have some hope that things can change next time out. But that depends on whether Mourinho can take a leaf out of Ferguson’s book and adapt with the times.