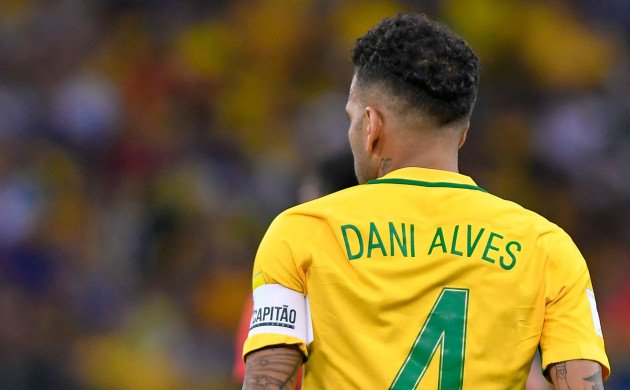 If Dani Carvajal is not 100 per cent fit in time, there is every chance that the final of the Champions League will feature four Brazilian full-backs.

True, Danilo – Carvajal’s reserve as Real Madrid right-back – has yet to fulfil the expectations the club had of him when he was signed from Porto, and may be on his way elsewhere at the end of the season.

But the other three are confirmed stars. Left-back Marcelo is enjoying his best campaign in his decade at Madrid; the 29-year-old has been at his exuberant attacking best without neglecting his defensive duties. He is Brazil’s established number one in the position, although Alex Sandro of Juventus, three years his junior, is doing his best to mount a challenge.

Tall and imposing, the Juventus man has been called up by Brazil for next month’s friendlies. On the other side of the Bianconeri's defence, right-back Daniel Alves is thoroughly enjoying playing as part of such a magnificent defensive unit, which gives him the freedom to gallop forward and whip in his superb crosses and through-balls. Many thought he was well past his sell-by date when he left Barcelona, but at the age of 34 he continues to be a fine representative of Brazil’s peerless tradition of attacking full-backs.

Like so many success stories, this one begins with failure. When Brazil lost the 1950 World Cup final, going down to Uruguay in traumatic fashion at the Maracana stadium, they were using the W-M system, which was all but universal at the time.

The centre-half marked the opposing centre-forward. The full-backs lined up against the wingers. The wing-halves took care of the inside-forwards, and so on. Football was a game of one-against-one battles. But one Uruguayan, the right winger Alcides Ghiggia, proved too much for his direct opponent – left-back Bigode - and won the game in the second half.

Brazil, then, arrived at a momentous decision. They needed more cover, so they withdrew an extra player into the heart of the defensive line and created the modern back four. A holding midfielder sitting in front reinforced the protection. When Brazil introduced the system in the 1958 World Cup, they did not concede a goal until the semi-final. And with the heart of the defence so well protected, the full-backs pushed out wider and soon found they had space in front of them.

In the Selecao's opening game against Austria, left-back Nilton Santos charged all the way upfield to score the side’s second goal. Known as the 'encyclopedia of football’ because of his all-round talent, Nilton Santos – along with right-back Djalma Santos – set the template for the position.

In 1970, of course, Brazil were captained by attacking right-back Carlos Alberto, who sealed that year’s triumph with a contender for the most perfect goal of all time in the 4-1 win over Italy in the final. One of his successors, Nelinho, was among the finest strikers of the ball ever seen – his goal against Italy in the 1978 third-place play-off defied belief.

The 1982 full back pair of Leandro and Junior had all the skill of top-class attacking midfielders.  In 1986 Josimar was unleashed on an unsuspecting world, and then came the wonderful pair of Jorginho and Branco – not sufficiently remembered today but both superb players. They have, perhaps unfairly, been overshadowed in popular memory by their successors Cafu and Roberto Carlos, who won the World Cup in 2002.

Cafu played in three consecutive World Cup finals – an incredible reward for a player who, at the start of his career, was rejected again and again. Much of his success comes from the hours he devoted to physical preparation. The then-Brazil national team physical trainer Paulo Paixao told me in 2002 that, while playing in Italy, Cafu used to stay behind for hours after his team-mates had gone home, putting in extra work because he felt that his club’s methods were not sufficient. It was the only way he could cope with such a demanding role, in which he had to work the full length of the flank for the duration of the game.

The development of the full-back, then, highlights the fact that in its era of supremacy Brazil led the field in terms of both tactics and physical preparation – a necessary antidote to the idea that they came off the beach doing the samba on their way to so many World Cup wins.

Interestingly, one of the countries quickest to follow their lead with the attacking full-back was England – and the story also has its roots in the lack of cover provided by the W-M system. That famous 6-3 Hungary win at Wembley in 1953 is widely seen as the death of W-M. Hungary’s centre-forward Hidegkuti dropped deep, bringing the centre-half with him, and the inside-forwards Puskas and Kocsis poured into the vacated space.

A decade later, England adopted the back four – under a player who was on the field that day in 1953, full-back Alf Ramsey. Not one to give much credit to foreign ideas, Ramsey kept quiet about the influence of Brazil on his side. But it is obvious.

First, he was quick to understand that, by withdrawing an extra man to the defensive line, the back four could leave the team short-handed in other positions. Brazil’s Mario Zagallo, the left winger in 1958 and 1962, plugged the gap by working back in midfield – as did Alan Ball and Martin Peters in Ramsey’s side.

And then there were the full-backs.  A constructive right-back in his playing days, Ramsey was clearly fascinated by the way that Brazil used the position. By 1970 he had gone all out. The athletic Keith Newton at right-back and the skilful Terry Cooper on the left were expected to make regular attacking contributions, working the entire flank and allowing the midfield to stay compact.

Then came the infamous quarter-final against West Germany. With 20 minutes to go England were two goals up – both set up by Newton charging down the right. But Ramsey made a mess of his substitutions and, in the midday Mexican heat, the full-backs tired against German wingers.

Standing in for Gordon Banks in goal, Peter Bonetti had a bad game and England lost 3-2. Newton never played for his country again, Cooper’s career was badly hit by a leg break and England’s experiment with attacking full-backs took a back seat. Things may have developed very differently if England had held on to win that game. It is one of football’s great ‘what if?’ moments.