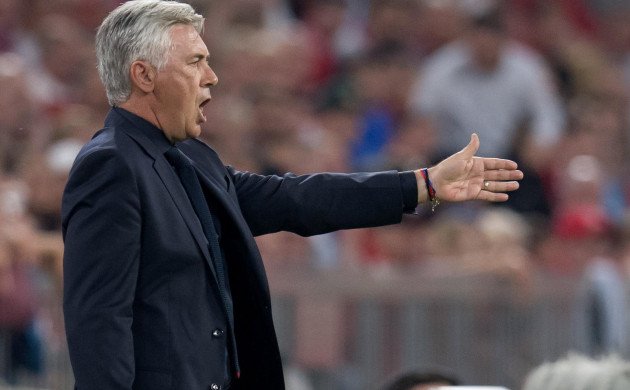 Ancelotti on borrowed time as Bayern Munich continue to labour

Despite beating Belgian minnows Anderlecht 3-0 in their opening Champions League clash on Tuesday night, Bayern Munich were left wondering what might have been.

"After going a man up, really, we should have shot them off the park," noted Arjen Robben at full-time, pointing out that the visitors had seen midfielder Sven Kums sent off just 11 minutes into the game.

Indeed, this will come as no surprise to fans of the German champions. For as long as Carlo Ancelotti has been in charge of the Munich side, a general malaise has slowly but surely set over the club.

Bayern are still winning most of the games they ought to win, but they're not doing much else. And that isn’t exactly what the club had in mind when they hired the former Real Madrid and Chelsea manager last summer.

Following Saturday’s 2-0 defeat by Hoffenheim, the Italian coach seemed to hit a new low: for the first time in his tenure in Germany, his emotions got the better of him. "The criticism here is too much,” noted the Bayern coach. “I am used to being criticised, but to be honest it is too much."

What then followed didn’t help things either. Speaking on German TV, former Bayern winger Mario Basler announced that he’d been told the Italian coach was on the cusp of agreeing a deal to cut his losses in Germany and move to China in January.

The very next day the coach who had bested him on Saturday, Julian Nagelsmann, admitted in an interview that he has always dreamed of managing the Bavarian giants and would be making the move to live in Munich with his family soon enough.

At the moment, suggestions that Ancelotti is on the cusp of losing his job to the 30-year old wonder-coach are no more than unconfirmed rumours. Yet what we can nail down is whether the senior tactician should be replaced at the Allianz Arena.

In Munich, coaches are rarely judged on their ability to claim Bundesliga titles. Although the German top division is an absolutely must-win for any Bayern manager, each boss is well aware that the manner of victory is much more important.

In the 2016/17 season Bayern spent all but three matchdays top of the Bundesliga, losing just two games throughout the entire campaign. Yet all that was against the backdrop of a completely uncontested title race.

Although they had only just been promoted, RB Leipzig were the only side who looked capable of upsetting the status quo. And despite a stellar run which had them sitting just three points adrift of Bayern before the winter break, the absence of another contender underlined just how little Ancelotti had to do to pick up the league title. Rather than cherish another championship, fans bemoaned the lackadaisical performances and the uninspiring tactics which failed to make the most of players like Thomas Muller.

Like Pep Guardiola before him, Ancelotti was always going to be judged on how close he came to picking up the club's sixth Champions League trophy. That was why Bayern hired Guardiola in the firt place and why they chose the man who had already won the competition three times as his eventually successor.

Yet despite the relative comforts of a league campaign that ticked along all by itself, Ancelotti was unable to satisfy Bayern’s hopes of upsetting Real Madrid and Barcelona’s dominance in Europe. Concerning defeats by Rostov and Atletico Madrid in the group stage were masked by a resounding 10-2 aggregate win over Arsenal in the last 16, yet when Bayern came up against Ancelotti’s former understudy, Zinedine Zidane, they looked like a team that had gone backwards in the last 12 months.

Despite matching Madrid and taking them to extra time, Bayern never looked like they were capable of beating the side who would go on to win the tournament for a second year in a row. Such margins between success and failure may seem narrow, but Ancelotti’s job is to match the pace set by Madrid and last season his side simply weren't able to.

If the 58-year-old believes the pressure applied to him is unfairly concocted by the media, then we need only look back at a recent interview with Robert Lewandowski ahead of the recent loss to Hoffenheim.

"Bayern will have to come up with something and be creative if the club wants to keep bringing world-class players to Munich,” Polish striker told Spiegel.

Although Lewandowski may have been taking aim at the club’s board, the hierarchy itself would perhaps turn their own gaze to the manager and suggest he already has the tools at his disposal to challenge in Europe. Perhaps Bayern just don't have the manager to make the most of their talent and compete with Madrid and Barcelona in the Champions League.