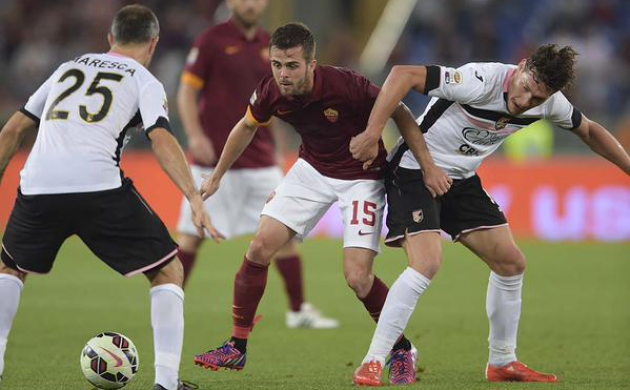 Roma host Palermo at the Stadio Olimpico on Sunday, with Luciano Spalletti’s side hoping to record a fifth successive victory as they continue their fight for the third and final Champions League place in Serie A.

It is now just over a month since Spalletti was reappointed in the Italian capital, with predecessor Rudi Garcia sacked after a run of just one win in seven top flight matches. The former Zenit boss got off to a slow start but has now overseen an upturn in fortunes, with Roma rediscovering their goalscoring touch going forward – the Giallorossi have found the back of the net 10 times in their last four league outings, with just three goals conceded at the other end.

Spalletti is not the only January arrival who has made a positive impact in the Eternal City: Stephan El Shaarawy and Diego Perrotti, loan signings from Milan and Genoa respectively, have been excellent since joining, adding more zip and spark to Roma’s play and helping to rejuvenate a team who previously looked to have gone a tad stale.

Edin Dzeko, the centre-forward who has struggled since joining from Manchester City last summer, could be the player who benefits most from the duo’s presence. On paper, the 6ft 4in frontman looked to be just what Roma needed – a physically imposing, technically adept out-and-out striker who could lead the line, link with team-mates and score goals – but he has still not really got going, netting just four times in 20 Serie A appearances. His latest strike came in the 3-1 win at Carpi last weekend, though, and with Perrotti and El Shaarawy taking some of the creative burden off Miralem Pjanic, Dzeko could be worth backing to get on the scoresheet again on Sunday.

While things at Roma are therefore looking up, the same cannot really be said for opponents Palermo. A run of one win in six league encounters has left the Sicilians just four points above the bottom three, with Beppe Iachini – who began the season in the dugout at the Stadio Renzo Barbera – reappointed as manager earlier this week in a bid to turn the worrying situation around.

In terms of the squad at their disposal, Palermo should easily have enough to avoid the drop. Franco Vazquez is a wonderful talent who will have to perform if the visitors are to take anything from their trip to the Olimpico, while Alberto Gilardino is a proven striker at this level and Oscar Hiljemark has impressed in the centre of midfield. The greater concern for Iachini is at the back, with Palermo having already conceded 42 goals this term.

Overall, it is difficult to look past Roma taking all three points this weekend. Now just two points adrift of the top three, the Giallorossi will be desperate to keep their renewed Champions League push on track, with their attacking firepower likely to prove too much for Palermo. A home win looks a sure bet, with over three goals to be scored another potentially good-value punt.