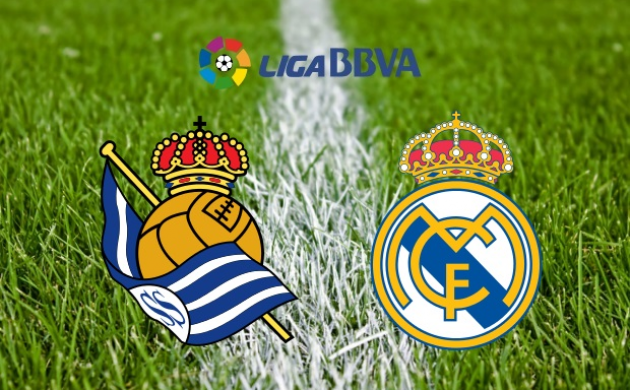 Real Madrid have the chance to temporarily move to the top of the La Liga table by beating Real Sociedad at Anoeta this weekend.

Zinedine’s Zidane’s side, who drew 0-0 in the first leg of their Champions League semi-final with Manchester City at the Etihad Stadium on Tuesday night, have fought their way back into the title race in Spain, closing the gap with leaders Barcelona from 12 points to just one in the last few weeks. Madrid have emerged victorious from each of their last nine league encounters and are in red-hot form domestically as they attempt to pick up a piece of silverware or two at the end of what has been an up-and-down campaign.

Madrid have been a little fortunate at times during their recent winning run, with last weekend’s triumph against Rayo Vallecano a case in point: Los Blancos were dire for much of the first half at the Campo de Futbol de Vallecas and deservedly fell 2-0 behind after 14 minutes, but ultimately turned the game around after the interval and secured a narrow 3-2 success.

There is still a feeling that Madrid are vulnerable away from home, with the majority of their most convincing performances under Zidane coming at the Santiago Bernabeu; a record of just three cleats on their travels this term – and none since a 2-0 win at Eibar in November – shows that Madrid can be got at defensively when they are the visiting side in La Liga.

Real Sociedad, for their part, have little left to play for in the remaining weeks of the campaign in Spain. 10 points clear of the bottom three, the Basque side are already safe from relegation and will instead be looking upwards, with just two points separating them from Valencia in eighth place.

Sociedad upset the odds by overcoming both Sevilla and Barcelona this month, although Eusebio Sacristan’s charges have struggled in many of the matches they were expected to win, including games with Eibar, Getafe, Las Palmas and Levante. Their record against the big boys gives them some hope ahead of this weekend, though – they also held Villarreal to a 0-0 draw away from home in their last outing – with Sociedad able to assume the role of underdogs against the title challengers from the capital.

While their trip to Anoeta will therefore not be easy for Real Madrid, they should still have enough to pick up another three points as they continue to put the pressure on Barcelona. A win would be enough for Madrid to climb to the top of the table for a few hours at least, with a 2-1 or 3-1 triumph worth backing on Saturday afternoon. Cristiano Ronaldo may not be fit – and even if he is, Zidane may be tempted to save him for the Champions League semi-final second leg against Manchester City in midweek – so Gareth Bale looks to be the best bet for first scorer, with over 2.5 goals to be scored another wager worth exploring.