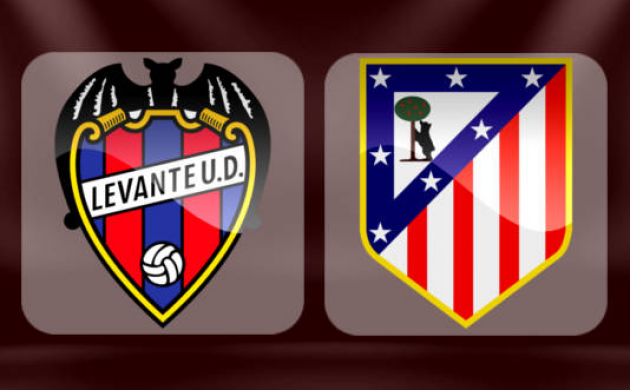 Atletico Madrid will be aiming to keep their title challenge alive when they travel to Valencia to take on already-relegated Levante this weekend.

Diego Simeone’s side celebrated reaching their second Champions League final in three years after securing an away-goals victory against Bayern Munich on Tuesday. It is a fantastic achievement to be one of the last two teams standing once again – Atletico will face city rivals Real Madrid at the San Siro in three weeks’ time – but they cannot afford to take their eye off the ball domestically. Level on points with leaders Barcelona, Atleti possess an inferior head-to-head record but look well placed to capitalise should the Catalans slip-up against Espanyol on Sunday or in the final gameweek of the campaign against Granada.

Atletico should have little trouble keeping the heat on Luis Enrique’s men when they tackle Levante on Sunday afternoon. A 3-1 defeat by Malaga last time out condemned Les Granotes to the second tier of the Spanish football pyramid with two games to spare, and it is difficult to see them ending a run of three league matches without a victory now that they have nothing left to play for. Only Real Betis have scored fewer goals than Levante in La Liga this term, a statistic that does not bode well ahead of Rubi’s charges meeting with the best defensive outfit in the whole of Europe.

Atletico have kept a remarkable 23 clean sheets in 36 top flight outings in 2015/16, with Barcelona and Sporting Gijon the only opponents to have scored two goals against the capital club in the same game. Their backline has been breached on just 16 occasions – a superior record to Barcelona, Real Madrid, Paris Saint-Germain and Juventus, and just one goal more than Bayern Munich have conceded in four fewer encounters – and it is difficult to see Levante finding a way through such a solid and resolute rearguard at the Estadi Ciutat de Valencia this weekend.

Given that they are highly likely to keep Levante out, it is worth backing Atletico to triumph on Sunday. It could be a low-scoring affair, however, with Simeone’s side having won each of their last three league games – as well as the first leg defeat of Bayern Munich last week – by a scoreline of 1-0. There are reasonable odds available on the same result against Levante, so that could be a favourable option for any punters looking for a balance between a good-value return and likelihood of outcome.

In terms of other markets, Antoine Griezmann is the obvious choice for first goalscorer but a better alternative could be Fernando Torres, who is available at longer odds and has found the back of the net in four of his last six La Liga appearances. Another interesting option could be the draw at half-time and Atletico win at full-time: the Colchoneros, after all, have scored their first goal after the 45th minute in their last two games and may have to settle for the same against Levante on Sunday.