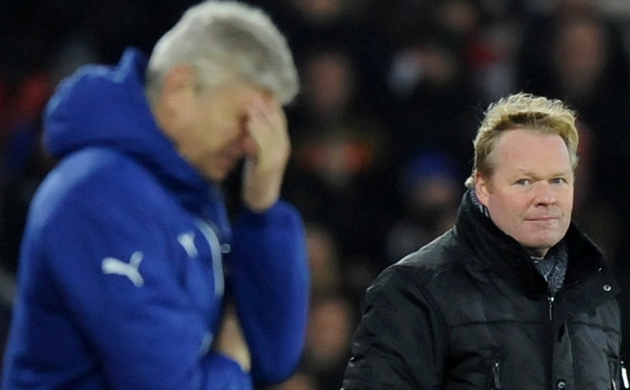 Koeman to frustrate Wenger yet again

Arsenal are looking to get their title challenge back on track, but face a difficult task when they welcome Ronald Koeman’s Southampton to the Emirates on Tuesday.

The Saints more or less destroyed Arsenal in the reverse fixture just five weeks ago, winning 4-0 on a day when absolutely nothing went right for Wenger’s men. Furthermore Southampton have won their last three games, the last one after Charlie Austin opened his account for the club with virtually his first kick on the ball as a Southampton player against Manchester United ten days ago.

Contrast this with Arsenal recent form, two points from three games, before a much changed side beat Burnley 2-1 in the FA cup at the weekend.

Arsenal are looking to start Alexis and Coquelin for the first time in the Premier League since early November, Walcott and Flamini making way from the side that started in the 1-0 defeat to Chelsea nine days ago.

Koeman on his part will be without Steven Davis yet again, while a late decision will be made as to whether Graziano Pellé will be included in the matchday squad. In his press conference on Monday Koeman indicated that he could start Austin at the Emirates, confirming that the former QPR frontman is now 100 percent fit.

The Dutchman has a record for frustrating Arsenal all the way since his days as Ajax manager about a decade ago.

The size of Arsenal’s task is refelected in the betting markets. On the Betfair exchange they are 1,84 to get the better of their opponents, traditioanally a good price on Arsenal at home when they are facing Europa League hopefuls.