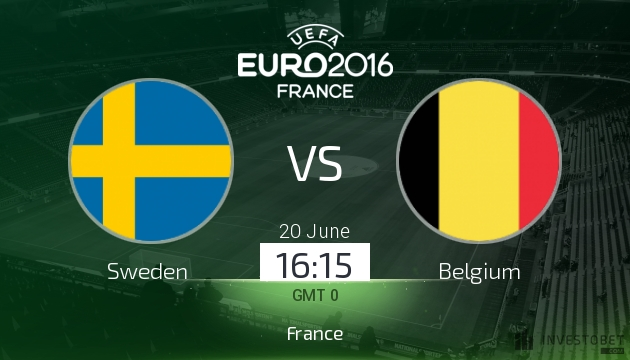 Belgium will secure their place in the round of 16 of the European Championship with victory over Sweden at the Allianz Riviera in Nice on Wednesday.

After suffering defeat against Italy in their opening match of the tournament, Belgium bounced back in impressive fashion by beating the Republic of Ireland 3-0 on Saturday. That result means qualification is in their hands heading into their final Group E game, and Marc Wilmots and his players will likely be confident of achieving a second successive win given the level of their performance last time out. With Kevin De Bruyne moved from the wing to a No.10 role, Belgium posed much of a threat in attacking areas and were also far more solid at the back, limiting Ireland to just a handful of chances. De Bruyne, Eden Hazard and two-goal hero Romelu Lukaku looked much brighter – all three were particularly dangerous in counter-attacking situations – while Axel Witsel also had an authoritative game as the anchorman in his country’s midfield.

There are still question marks hovering over this Belgian outfit, however. Wilmots has come in for criticism for a perceived lack of tactical nous and an inability to create a well-functioning collective that is equal to the sum of its individual parts, while it is still unclear how adept Belgium are at creating good goalscoring chances when opponents sit back and deny them space in behind; it was notable, indeed, that two of their goals against the Republic of Ireland came when their opponents had pushed numbers forward and left space in behind into which Belgium could break. There are plenty of talented players within the Red Devils’ squad, though, and it could be a case of individual magic making up for collective shortcomings this summer.

Sweden have been rather disappointing at Euro 2016 up to now, failing to record a single shot on target in their opening two games. Their overall performance against Italy on Friday probably deserved a point – Eder’s late winner sent the Azzurri through to the round of 16 with a narrow 1-0 victory – but manager Erik Hamren can have few complaints about the way things have gone in France so far given how little his players have threatened the opposition’s goal. While Sweden looked well organised against Antonio Conte’s charges last time out, there is a real lack of attacking inspiration and the team’s sole idea seems to be to give the ball to Zlatan Ibrahimovic and hope for the best.

A win would probably take Sweden through as Group E runners-up ahead of Belgium, but it is very difficult to see them picking up all three points here: Wilmots’ men seem to have their mojo back, while the Swedes have done little to suggest they have the quality to break down their opponents’ defensive unit. A comfortable 2-0 Belgium victory looks like the best bet here, although a wager on Sweden’s Zlatan Ibrahimovic to score in what looks likely to be his final European Championship appearance is tempting.