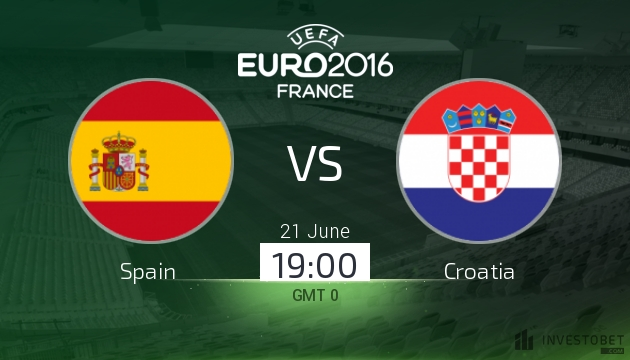 Spain and Croatia go head-to-head at the Nouveau Stade de Bordeaux on Tuesday night with top spot in Group D up for grabs.

The European Championship holders delivered the performance of the tournament so far when they cruised past Turkey 3-0 on Friday, a convincing win that secured their place in the round of 16 with a game to spare. Spain were excellent from start to finish, dominating possession as we have come to expect from them but also frequently playing passes with penetration and incision rather than simply keeping the ball for the sake of keeping it. Andres Iniesta has been the competition’s best player so far, with the Barcelona man again excelling against the Turks, while Nolito and Alvaro Morata – the two main newcomers to the starting XI this summer – both got on the scoresheet and delivered positive all-round displays.

One of the most impressive things about Spain is their fantastic defensive record, with two back-to-back clean sheets so far in France extending their run without conceding a goal at the European Championship to 690 minutes. Italy striker Antonio Di Natale was the last man to breach the Spanish backline in the opening game at Euro 2012, and their proactive form of defending and solidity at the back could be what takes them all the way to a third straight continental trophy over the next few weeks.

Croatia have arguably been the second best team at the Euros so far, with their tally of four points not really reflecting how dominant they were in meetings with Turkey and Czech Republic. Against the latter last week, Ante Cacic’s charges dominated and deservedly opened up a 2-0 lead, only to then lose concentration and be pegged back by the Czechs. The withdrawal of Luka Modric through injury after an hour was cited as a potential reason for Croatia letting their opponents back into the match, but they still had plenty of chances to put the game to bed by scoring a third once the Real Madrid maestro had departed.

A more serious issue came on the terraces, with Croatia fans halting the game for a few minutes in the second half by throwing flares onto the pitch. There are divisions between the supporters and the country’s football federation back home, but it is to be hoped that such scenes are not repeated in this clash with Spain, not least because one of the objects in Saint-Etienne almost exploded in the faces of Ivan Perisic and a nearby member of stadium staff.

In many ways, this encounter has the makings of a classic: Spain and Croatia have been the best teams to watch so far at the Euros, with both sides containing plenty of talented technicians. However, the fact that a draw would guarantee the pair’s progression to the last 16 means that is the bet worth backing, with Croatia striker Mario Mandzukic a good choice to break his Euro 2016 duck by finding the back of the net anytime against Spain.