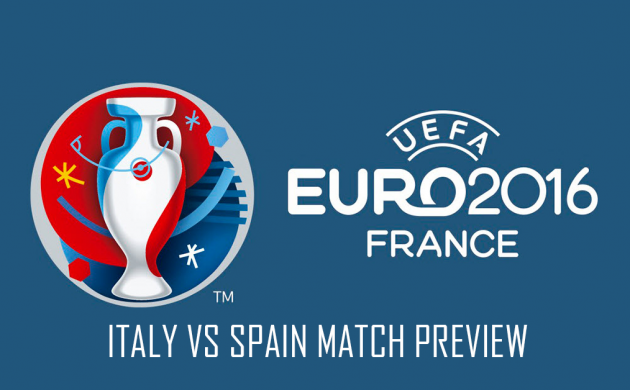 The Stade de France in Paris will host a rematch of the Euro 2012 final between Italy and Spain in the round of 16 of this year’s European Championship on Monday evening (5pm, BBC One or ITV One).

Italy were widely written off before the competition got under way, with many fans and pundits arguing that the Azzurri would struggle to make it into the latter stages in France. There is certainly a comparative lack of individual talent within the current group compared to Italian teams of the past, but a 2-0 victory over Belgium in their opening Group E encounter silenced some of the doubters and showed that Italy still have more than enough quality within the ranks to do well this summer. Indeed, in goalkeeper Gianluigi Buffon and centre-backs Leonardo Bonucci, Giorgio Chilleini and Andrea Barzagli, Italy have arguably the strongest defensive unit in the competition, while Antonio Conte is a fantastic manager who has the ability to elevate any team above its natural level.

Italy followed up that Belgium victory with a slender 1-0 win over Sweden, a result that secured their place in the knockout stage as Group E winners. Conte’s men lacked invention and creativity in that match, however, and were forced to rely on a piece of magic from Eder to seal all three points late on. That lack of attacking spark is the primary concern for Italy at present, although the fact that they are set to take on Spain could actually be a blessing in disguise: Vicente Del Bosque’s charges will inevitably dominate possession and push high up the pitch on Monday, which means Italy can focus their efforts on attempting to hit their opponents on the counter-attack.

Top spot in Group D looked to be Spain’s heading into the final round of first-stage fixtures, but a 2-1 defeat by Croatia saw the holders pushed down to second place. That loss to an impressive Croatian outfit showed that Spain are far from invincible, although it is worth bearing in mind that the two-time European champions were superb in their first two matches against Czech Republic and Turkey and created some excellent goalscoring opportunities throughout Tuesday’s surprise reverse. Indeed, whereas the majority of the other pre-tournament favourites have still not fully hit their stride, Spain have produced some wonderful free-flowing football so far this summer.

Having said that, though, there are still certain issues for Spain to be wary of ahead of the knockout rounds, where a single slip-up could cost them their place at Euro 2016. A characteristic of Del Bosque’s sides down the years has been their constant search for control, with Spain often producing proactively defensive football as they relentlessly keep the ball without really going for the kill. That is arguably what cost them against Croatia, when the Spanish seemed content to hold out for a 1-1 draw and played far fewer penetrative and incisive passes in the closing stages, an approach that came back to bite them when they conceded in the 87th minute.

Nevertheless, it is obvious why Spain are considered favourites for this potentially mouth-watering round of 16 encounter. Del Bosque has an incredibly talented set of players to call upon – particularly in midfield, where Thiago Alcantara and Koke have still not been handed a single start – while Spain also have the experience of going all the way in tournament football in recent years. A 1-0 win for the holders could therefore be the best bet for this clash in Paris, with a low-scoring affair potentially in store in what looks set to be a very tight encounter. In terms of the first goalscorer, Alvaro Morata is probably the leading option.