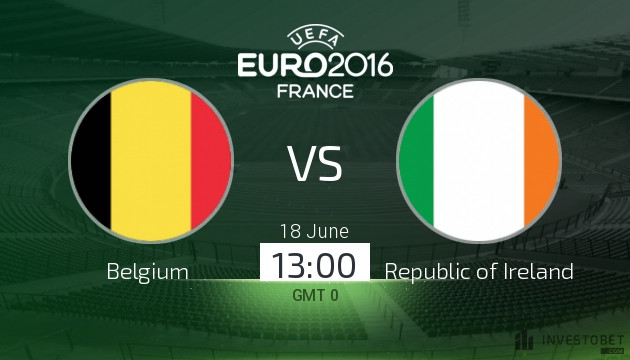 Belgium will be looking to bounce back from their opening-game defeat by Italy when they take on the Republic of Ireland in Group E on Saturday afternoon.

The Red Devils were extremely disappointing in that 2-0 loss to Antonio Conte's side, with Belgium guilty of being shaky at the back, disjointed in the middle and profligate at the top of the pitch. Many had tipped Belgium to triumph this summer before the competition got under way last Friday, but they will have to drastically improve on their first performance if they are to even progress to the latter stages. There can be no doubting that Belgium have a tremendous squad full of excellent individuals, but their major problem seems to be a failure to produce a coherent collective that amounts to more – or is at the very least equal to – the sum of its parts. That proved their undoing at the 2014 World Cup in Brazil, and manager Marc Wilmots does not seem to have moved any closer to finding a solution in the two years since.

Eden Hazard, Kevin De Bruyne and Romelu Lukaku were all disappointing on Monday night, with all three uncharacteristically wasteful in possession and in front of goal. It was something of a surprise that Mousa Dembele did not feature at all in Bordeaux; the Tottenham Hotspur man's driving dribbles through midfield could have helped to unlock a stubborn Italy outfit, with the 28-year-old a potential replacement for Marouane Fellaini in the centre of Belgium's midfield this weekend. The lack of strong natural full-backs in the squad is another problem, with Jan Vertonghen looking rather uncomfortable on the left-hand side of the defence last time out.

The Republic of Ireland kick-started their Euro 2016 campaign with a 1-1 draw against Sweden, a disappointing result given that they were 1-0 ahead and playing by far the better football at one stage. Ireland sat back too much upon taking the lead, however, allowing Sweden to see more of the ball in dangerous areas and eventually succumbing to the pressure when Zlatan Ibrahimovic forced an own goal out of Ciaran Clark. Martin O'Neill's men are probably just one win away from a place in the round of 16, though, and they will fancy their chances of doing some damage on the counter-attack against a Belgium team who will be obliged to take the initiative following their deflating defeat by Italy.

Belgium will pick up their first victory at a European Championship on foreign soil since 1984 if they play to their maximum level, but the Republic of Ireland will certainly not make things easy for them. Nevertheless, a Belgium victory looks to be the best bet here, perhaps by a one-goal margin and with both teams to find the back of the net. On the goalscorer front, De Bruyne and Jeff Hendrick are probably the best options for their respective teams, while centre-back John O'Shea could be a good outside bet given that Ireland will try and make the most of set-piece situations.