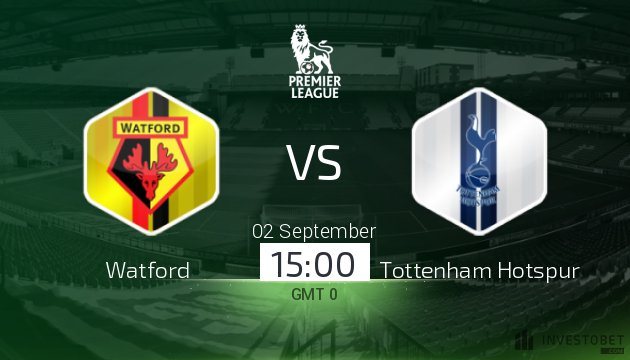 Watford and Tottenham Hotspur will both be hoping to make it four victories from four when they lock horns in the Premier League on Sunday afternoon. Javi Gracia’s men will be a tough nut to crack, but Spurs look to be in excellent shape at present and should extend their winning run this weekend.

The Hornets were tipped for relegation by some before the 2018/19 campaign got under way, and although they are still a long way from being mathematically safe, former Malaga and Rubin Kazan manager Gracia could hardly have asked for a better start to his first full season in charge at Vicarage Road. An opening-day triumph over Brighton and Hove Albion set the ball rolling on a perfect August, which also saw the Hertfordshire outfit beat Burnley at Turf Moor and then overcame Crystal Palace in front of their own fans. Roberto Pereyra has stepped up to fill the creative void left by Richarlison, while Troy Deeney and Andre Gray both look sharper than they did in 2017/18, when neither striker managed to string together a consistent run of form.

There was a degree of negativity surrounding Tottenham as the season got under way, with supporters disgruntled at the absence of any new signings and the delay to the opening of their new stadium, which may now be pushed back until 2019. Yet the on-field continuity has actually served Spurs well in the opening weeks of the campaign; Mauricio Pochettino's charges kicked things off with a 2-1 success at Newcastle, before getting the better of Fulham 3-1 at Wembley and, most impressively of all, defeating Manchester United 3-0 at Old Trafford last time out. Such results have lifted optimism around the club and led to some backing Tottenham as genuine title challengers, a label which was not really being used by anyone at the start of August.

Watford will have to make do without Tom Cleverley (Achilles), Younes Kaboul (foot) and Gerard Deulofeu (groin), while Miguel Britos is a doubt with a knock. Gracia will stick with the 4-4-2 formation his side used last time out, with Will Hughes expected to tuck inside from his nominal wide-midfield berth to ensure the home team do not get overloaded in the centre of the park. At the top of the pitch, Gray and Deeney are both physical strikers so we can expect to see Watford look to play balls into their front two quickly in an attempt to catch Spurs cold in transition.

Tottenham, meanwhile, will be unable to call upon the services of Erik Lamela (hamstring), Vincent Janssen (foot), Victor Wanyama (knee) and Juan Foyth (thigh), while Son Heung-min is still absent as he represents South Korea at the Asian Games in Indonesia. Pochettino has created a situation whereby Spurs are comfortable switching between three and four-man defences, and we could see the visitors opt for the former here as they attempt to contain Watford's strike duo of Deeney and Gray. Davinson Sanchez will return to the starting XI if Pochettino does indeed opt for three at the back, while Ben Davies may also replace Danny Rose on the left-hand side. Lucas will keep his place after scoring three goals in his last two outings in the Premier League, and his speed and direct movement could cause problems for the hosts' rearguard.

Taking everything into account, it is worth putting some money on an away win with both teams to score at Vicarage Road. Tottenham will probably too strong despite Watford's strong start, although the home side could continue their run of scoring in every Premier League game at the start of the 2018/19 campaign.