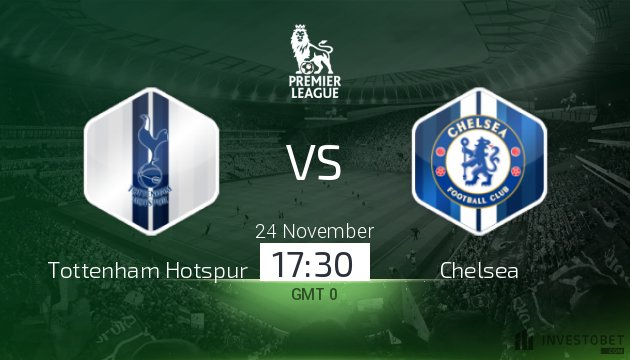 Tottenham Hotspur will host London rivals Chelsea at Wembley this weekend, with both teams looking to stay in touch with Premier League leaders Manchester City.

Spurs' first third of the season is difficult to assess. On the one hand, a return of 27 points from a possible 36 represents their best start to a campaign under Mauricio Pochettino, and although they have been beaten at home by both Liverpool and Manchester City, the north Londoners have largely won the games they have been expected to - nine of their 10 other matches resulted in victories, with the exception being a 2-1 defeat by Watford early on. Pochettino deserves great credit for keeping Spurs within touching distance of the top of the table despite some tricky circumstances, including a lack of transfer business in the summer and continued frustration with the move to a new stadium. Performance-wise, though, Tottenham have been underwhelming thus far, with the 1-0 victory over Crystal Palace immediately prior to the international break just the latest example of a game which could Spurs could easily have dropped points in on another day.

It is easier to get a clearer reading on Chelsea's season so far, largely because no one thought they would still be unbeaten after a dozen fixtures. The transition from Antonio Conte to Maurizio Sarri was expected to be far more turbulent, but the former Napoli job has done a magnificent job of getting his ideas across to his new charges in a short space of time. The Blues are only four points shy of top spot but will still be focusing on the top four this term, before hopefully mounting a sustained title tilt in Sarri's second season at the helm. With Eden Hazard - the division's outstanding player - on their side, however, it is not beyond the realms of possibility that Chelsea could push Manchester City and Liverpool all the way at the summit of the standings in 2018/19.

Tottenham will have to do make do without Davinson Sanchez (hamstring), Mousa Dembele (ankle), Danny Rose (groin), Vincent Janssen (foot) and Jan Vertonghen (hamstring), while Kieran Trippier (groin) will be assessed before the weekend. Foyth will continue at centre-half alongside Toby Alderweireld, but it will be interesting to see how Pochettino structures his midfield: an attacking approach could see him use Christian Eriksen and Dele Alli ahead of one holding player, while a more cautious game plan would likely see one of the two aforementioned names either on the bench or pushed forward as part of the frontline. Lucas Moura or Son Heung-min will provide the pace and direct running in support of Harry Kane.

Mateo Kovacic is expected to be available for Chelsea following a muscle problem, but Sarri has no other injury concerns heading into this derby. The Italian will continue with his favoured back four of Cesar Azpilicueta, Antonio Rudiger, David Luiz and Marcos Alonso, with Jorginho and N'Golo Kante certain to start in midfield. The remaining spot in the engine room will go to either Kovacic and Ross Barkley, while Willian and Pedro Rodriguez will battle it out for a place in the front three alongside Hazard and Alvaro Morata. Sarri likes his teams to control possession whenever possible, but we may see more of Chelsea's transition game in this encounter.

Taking everything into account, it could be worth backing under 2.5 goals in this one. Neither team is likely to overcommit in attack for fear of leaving themselves exposed at the other end of the field, which could result in a tight, low-scoring affair. In terms of a potential winner, Tottenham's injury problems mean that Chelsea could be a decent bet to come out on top on Saturday evening.