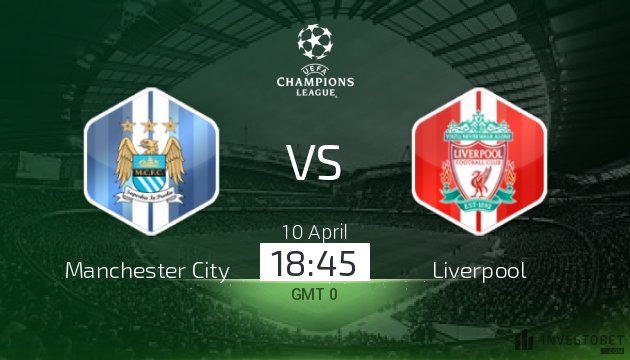 The market to qualify might not have acknowledged it, but Manchester City’s chances of pulling off an astonishing second leg turnaround in this Champions League quarter-final diminished even further with their second-half collapse against Manchester United.

There’s no doubt the Premier League champions-in-waiting are capable of beating a semi-stretched Liverpool side by four clear goals on their day - indeed, they were 5-0 winners over Jurgen Klopp’s men back in September - but one of the most crucial elements among the many intangibles required to pull it off might now be lost.

It’s one thing getting yourself back into the tie with a couple of timely strikes, but quite another to then go on and finish the job in the closing stages when the emotional well is dry. Both teams are bound to be feeling the effects of three games in six days physically, but mentally the terrain has been kind on the Reds and brutal on the Sky Blues.

That’s not entirely down to luck, of course. The Merseysiders put their best foot forward in the opening 45 minutes at Anfield last Wednesday and the dividends of that storm they created have been exponential. For City, the stakes have been ramped up at the very same time that they have started to doubt themselves, and the sense of uncertainty has only snowballed.

Some will point the finger at Pep Guardiola for his team selection at the weekend, but had Raheem Sterling dispatched just one of his two gilt-edged opportunities in that first-half exhibition against United, it would have been a different story and the Catalan would have been lauded as a genius for the shrewd nuance of his rotation.

Instead, Paul Pogba’s first goal mattered because it instantly transformed the whole mood in the stadium. Suddenly, the fans, exhausted through sheer jubilation at half-time, started to ask 'what if' and defenders - Vincent Kompany and Nicolas Otamendi, in particular - had flashbacks to three days prior.

Now City must put themselves through the wringer once more, knowing they’re good enough to achieve whatever they want to going forward when momentum is with them, but equally aware that they could crumble should the tide turn. Under those conditions, goals feel inevitable - and potentially lots of them - with the over 4.5 and over 5.5 lines giving best bang for your buck.

If we only see City at their best for the entire 90 minutes, then that’s on Liverpool. The visitors might take a measured approach to begin with but they possess the attacking talent to expose City’s current frailties and they simply have to make sure they kill the tie with an away goal before the hosts can truly get their tails up. And once they’ve bagged one, a second might not be a stretch.

If City do have the energy to attack this game like they did on Saturday, then we should expect them to just keep coming and coming. The beauty of them being nearly two years into their Guardiola masters degree is that they can now create incisive attacking patterns on auto-pilot, at least when they're not sick to the stomach.

This analysis is mostly hypothetical, of course. It’s possible that City will be spent from the first whistle and never really get up to speed, in which case we confine this game to the rubbish bin. But don’t fixate too much on those early rolls of the dice and how this game opens up; just take a leap of faith that it will. The fun comes in speculating what happens once the blue-touch paper has been lit.

The onus should be on Liverpool to make an impression on the scoresheet in the opening 45-60 minutes because if they find themselves dropping into last-ditch mode later on, they don’t really have much quality to call upon from the bench. Making no bold attempts to give themselves the cushion of an extra two goals' leeway would essentially be an act of masochism.