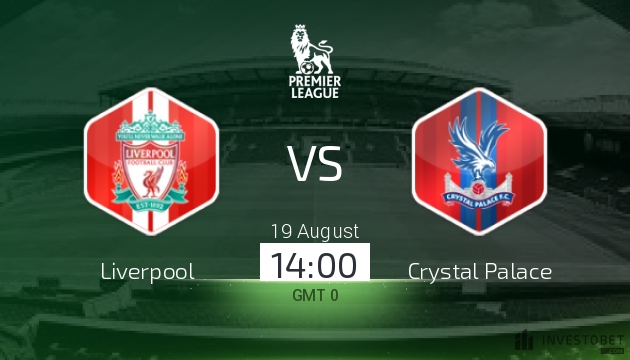 Liverpool and Crystal Palace will both be aiming to record their first victories of the 2017/18 Premier League campaign when they go head-to-head at Anfield this weekend.

The Reds looked set to pick up all three points on the opening day, as goals from Sadio Mane, Roberto Firmino and Mohamed Salah gave the visitors to Vicarage Road a 3-2 lead over Watford heading into second-half stoppage time. Jurgen Klopp's men could not hold on, however, as Miguel Britos netted from a corner to salvage a point for the Hornets in front of their own supporters. It was a familiar failing for the Reds, who conceded 12 goals from set-piece situations last season; although Liverpool were scintillating at times going forward, they were once again undone by some shaky defending at the other end of the field.

After securing a top-four finish last time out, the club have endured a rather difficult summer off the pitch. Salah is an excellent addition and was snapped up early in pre-season, while Andrew Robertson also looks like a sensible signing, but targets such as Virgil van Dijk and Naby Keita have, at least up to now, proved elusive. In addition to that, Philippe Coutinho has been heavily linked with a move to Barcelona, a story which looks set to rumble on until the end of the month. Qualifying for the Champions League will be the target again this year, but the Reds still have work to do if they are to enjoy a successful campaign.

Crystal Palace got their season off to a poor start with a 3-0 home defeat by Huddersfield Town on Saturday afternoon. It was a very flat performance from the Eagles, who struggled to match their opponents' intensity, energy and dynamism, while also being guilty of several defensive mishaps and profligacy in front of goal. Frank de Boer's new 3-4-3 system certainly encountered a fair few teething problems, but Palace fans will take solace from the fact that their side has a surprisingly superb record at Anfield in recent seasons.

Former Barcelona player and Ajax head coach De Boer is aiming to implement a new style of play at Selhurst Park this term. Palace have traditionally been a team who look to sit a little deeper, cede possession hit opponents on the counter-attack, but the Dutchman is keen for his side to "dominate" games to a greater extent - both with and without the ball. Patience will be required if the overhaul is to bear fruit, and questions will be asked of the current squad's suitability for such a style if Palace do not pick up some positive results in the coming weeks.

Klopp will be unable to call upon the services of Adam Lallana (thigh), Daniel Sturridge (thigh), Coutinho (back) and Nathaniel Clyne (hamstring) for Saturday afternoon's meeting with Palace. Liverpool struggled at times last season when facing sides who defended deep and denied them space in behind; although they remained unbeaten when facing fellow members of the big six, the Reds dropped points on 11 occasions against the rest.

De Boer, who will have to make do without Wilfried Zaha (knee), Bakary Sako (muscle), Pape Souare (broken leg) and Connor Wickham (knee) for this weekend's trip to Merseyside, may draw confidence from that fact. Regardless of his ideals, the Palace boss will have to be prepared for his team to have less of the ball than the hosts, with the speed of Andros Townsend and Jeffrey Schlupp likely to be important on the counter-attack.

Despite the fact they have lost their last three home games against Palace, it is worth backing Liverpool to emerge victorious on Saturday. A home win with both teams to find the net is a wager worth considering, while Salah looks like a good choice to get his name on the scoresheet anytime.